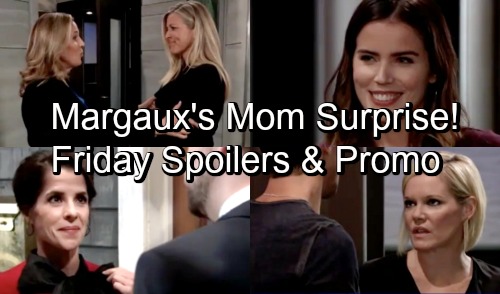 General Hospital (GH) spoilers for Friday, October 26, tease that Ava (Maura West) will clash with Griffin (Matt Cohen) again. Every time she sees her ex, rage comes rushing back. Of course, Ava’s also furious with Kiki. Her name will naturally come up during this confrontation, so Ava should get even more riled. It sounds like Ava’s vengeful desires will soon be stronger than ever.

Meanwhile, Kiki will spot Sasha (Sofia Mattsson) and strike up another conversation. Sasha decided to extend her trip yet again, so Kiki will think that’s great news. She’ll suggest they should “kick this getting to know each other thing up a notch.”

Sasha will grin from ear to ear and wonder what her new sister has in mind. The girls will find some fun to get into, but they should enjoy the peace while it lasts. If Ava’s plan works, a family feud could be brewing.

Elsewhere, Sam (Kelly Monaco) will head off on a mission. Her journey will take her outside of Port Charles, but she won’t be alone. Spinelli (Bradford Anderson) will come along for the ride, so GH fans can expect some humorous moments.

It appears they’ll track down Jeanette Marino (Ely Pouget), Margaux’s (Elizabeth Hendrickson) mother and Vincent’s widow. Thanks to Spinelli’s information, Sam knows Jeanette’s hiding something. She vowed to figure out what it is, so Friday’s charade may help with that. They’ll pose as other people and score whatever they can.

Other General Hospital spoilers say Lulu (Emme Rylan) will ask “Kevin” aka Ryan (Jon Lindstrom) some tough questions. She’s doing plenty of research for the Ryan Chamberlain anniversary edition, so she’ll want to dig deep. Lulu will wonder if some people are just born evil. She’ll struggle to wrap her head around just how sinister Ryan was, but she won’t know he’s sitting there in the flesh!

Over with Laura (Genie Francis), she’ll be gentle with Carly (Laura Wright). They agreed to visit Ferncliff together, but Laura understands how difficult that’ll be. After everything Carly went through, she promised herself she’d never go back to that horrible place.

However, Carly wants to help the mystery patient and any other poor souls who need it. She already made the decision to return, but Laura will give her an opportunity to back out. Will Carly take it or move forward with this visit as planned? Either way, Laura will inevitably do some investigating. She could pose another risk to Ryan’s plot soon enough.

Finally, Liz (Rebecca Herbst) will spend some time with Kiki. They’ll strengthen their friendship, which is good since Kiki isn’t sticking around. Liz needs to soak in all the warm conversations she can. Since Kiki may be killed off down the road, every minute her loved ones spend with her is important.