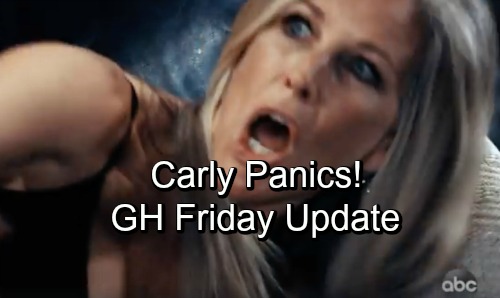 General Hospital (GH) spoilers for Friday, October 26, tease that Griffin (Matt Cohen) will offer Ava (Maura West) an apology. He’ll express regret over some new mistake, but Ava will just scoff at that. She’ll argue that out of all the things Griffin has to be sorry for, this is nothing.

Griffin will probably tell himself that he at least tried. He’s pretty fed up with Ava as well, so he may view himself as being the bigger person here. However, no peace will be achieved between these two. Ava will walk away even angrier than before, so a storm’s brewing for both Griffin and Kiki (Hayley Erin).

Speaking of Kiki, she’ll have a busy day on Friday. After chatting with Liz (Rebecca Herbst) at GH, Kiki will turn her attention to Sasha (Sofia Mattsson). Their bonding session was cut short recently, but Kiki will think they can fix that. She’ll suggest going out for a night on the town and having some sisterly fun.

Outside of Port Charles, Spinelli (Bradford Anderson) and Sam (Kelly Monaco) will put a plan in motion. They’ve been discussing Margaux’s (Elizabeth Hendrickson) mother and the secrets she must be keeping. Jeanette (Ely Pouget) ignored Vincent’s life insurance policy for decades, but tried to cash in as soon as the remains were found. There’s more to the story, so Sam and Spin will be on the case.

This dynamic duo will don some interesting outfits and prepare for a meeting. It looks like they’ll dupe Jeanette and hopefully learn some new details. Back at GH, Ryan (Jon Lindstrom) will talk to a curious Lulu (Emme Rylan). Of course, she’ll believe she’s picking Dr. Kevin Collins’ (Jon Lindstrom) brain instead.

Lulu will mull over all the evil in the world and how it comes into being. She’ll get that some people make dark choices, but are others just dark from the start? Ryan will likely offer a cryptic and creepy answer. Lulu may find herself weirded out by “Kevin” and his apparent personality change.

Other General Hospital spoilers say Laura (Genie Francis) will worry about Carly (Laura Wright). They recently discussed Ferncliff and the improvements that need to be made. Since Laura’s running as a write-in mayor candidate, it’s an issue she wants to address. The ladies agreed to stop by Ferncliff together, but Carly’s nerves will quickly take over.

Laura will sense that Carly may not be up to this. She’ll provide comfort and suggest that no one would blame her for bailing. Carly will look distraught, but will she suck it up and visit Ferncliff anyway? She might be Kevin’s best shot at getting out of there, so let’s hope so.

Sadly, Kevin won’t be scoring his freedom just yet. It’ll take many clues and plenty of work before Kevin can resume his rightful role in PC. On the bright side, Laura and Carly just might get a step closer to the truth. We’ll give you updates as other General Hospital news comes in. Stick with ABC’s GH and don’t forget to check CDL often for the latest General Hospital spoilers, updates and news.