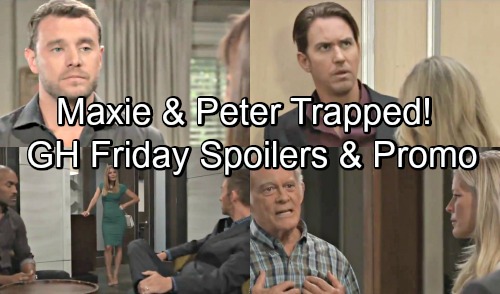 General Hospital (GH) spoilers for Friday, September 14, tease that Valentin (James Patrick Stuart) and Curtis (Donnell Turner) will have another meeting. They’ll discuss the search for Nina’s (Michelle Stafford) daughter, which isn’t progressing as fast as Valentin would like. He’ll tell Curtis that he’s just anxious to let Nina know, but an interruption will catch them both by surprise.

When Valentin and Curtis look over, they’ll see Nina standing nearby. She’ll wonder what Valentin’s up to, but he’ll do his best to throw her off the trail for now. In the meantime, Margaux (Elizabeth Hendrickson) and Jordan (Briana Nicole Henry) will go over some new evidence. Will the incriminating gun surface at Charlie’s Pub? Regardless, Margaux will be determined to crack this case.

Sonny (Maurice Benard) intends to face this problem no matter what, but he’ll have to tackle a different crisis first. Mike (Max Gail) knows that his condition is declining. He recently offered to look at the memory care facility brochures, but Carly (Laura Wright) and Sonny didn’t pressure him. They just want Mike to be as happy as he can for as long as possible.

Nevertheless, Mike will announce that he’s mulled it over and decided on some changes. It sounds like he’ll move forward with the facility plan. Mike doesn’t want to be a burden or bring any more danger to his loved ones. He cares about his family, so he’ll do whatever it takes to ease their minds.

Other General Hospital spoilers say Kim (Tamara Braun) and Drew (Billy Miller) will have a tense chat. Kim will insist that they need to develop better communication skills. She’ll realize Drew’s been blabbing about Oscar’s (Garren Stitt) condition to Sam (Kelly Monaco), which doesn’t line up with their goal of keeping this quiet.

While Drew and Kim try to get on the same page, Sam and Monica (Leslie Charleson) will run into Oscar. It won’t take long for them to notice his injured hand. When asked about it, Oscar will fib to protect both himself and Cameron (William Lipton). They had a bit of a brawl, but neither one of them wants to get in trouble for it.

In the elevator they’re sharing, Maxie (Kirsten Storms) and Peter (Wes Ramsey) will get a shock. GH spoilers say it’ll suddenly come to a screeching halt, so they should have plenty of time to catch up. That’s not what Maxie wants, but maybe it’s what she needs. Peter will certainly appreciate the chance to apologize again and work toward peace.