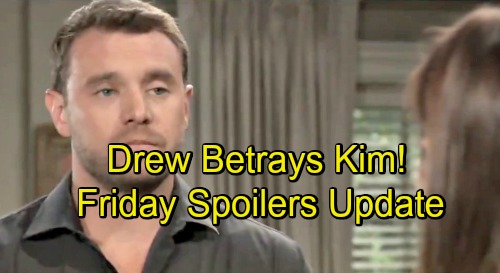 General Hospital (GH) spoilers update for Friday, September 14, tease that Mike (Max Gail) will have a serious conversation with Sonny (Maurice Benard) and Carly (Laura Wright). He’ll insist that it’s time to rethink a few things, so they’ll see where this is headed. Mike loves being at home with his family, but he also knows he’s getting worse. He doesn’t want to bring so much danger and drama to their lives.

Carly will wipe away tears as Mike explains his choice. Sonny will be equally upset since he’ll understand how hard this is for his father. Mike and Sonny are finally connecting, so the idea of sending Mike to a facility is difficult to accept. Nevertheless, Sonny knew this day would come sooner or later. It looks like Mike will be prepared to pack up his stuff and make the move.

Meanwhile, Margaux (Elizabeth Hendrickson) will score a new lead in the human remains investigation. She’s quite curious about the body that was discovered under Charlie’s Pub. Since that corpse is most likely Margaux’s father, GH seems to be setting up a major revelation.

For now, Margaux will get a crucial clue. She’ll fill an inquisitive Jordan (Briana Nicole Henry) in, so they’ll feel like they’re getting somewhere. Over with Oscar (Garren Stitt), he’ll be cornered in the park. Monica (Leslie Charleson) will be thrilled to see him, so she’ll walk over with a greeting. Sam (Kelly Monaco) will also be around to say hi, but Oscar’s swollen hand will certainly cause concern.

After Oscar found out Cameron (William Lipton) kissed Josslyn (Eden McCoy), he threw a punch and started a fierce fight. Thankfully, the teens settled down and decided to keep the matter quiet. Of course, that’s easier said than done – especially since Oscar’s health is such a hot topic these days.

Oscar will struggle to lie his way out of this while Kim (Tamara Braun) confronts Drew (Billy Miller). She’ll learn that Drew’s been spilling private details to Sam, so she won’t appreciate it. Kim will manage to keep her anger in check, but she’ll definitely demand a discussion. She’ll make it clear that they have to start communicating better. Kim won’t want Oscar’s secret to become the talk of the town.

Other General Hospital spoilers say Maxie (Kirsten Storms) and Peter (Wes Ramsey) will be caught off guard. GH fans know Maxie jumped on the elevator in a hurry, but she didn’t realize Peter was already inside. Maxie will determine that she can bear a short ride downstairs, but it’ll turn into a lengthier one when the lift breaks down.

On the bright side, Peter will have a shot at apologizing again! Maxie will be trapped with him, so she’ll have no choice but to listen. Over with Valentin (James Patrick Stuart), he’ll push Curtis (Donnell Turner) to speed up the hunt for Nina’s (Michelle Stafford) kid. He’ll want to share updates with Nina as soon as possible.

Nina will catch part of their chat, so she’ll immediately start hurling questions. Since Valentin doesn’t want Nina to know about her long-lost daughter yet, he’ll sidestep whatever she asks. However, General Hospital viewers know Nina has a similar hunch. She just doesn’t have as much information as Valentin. A little backup never hurts, so perhaps Nina and Valentin can join forces eventually.

It sounds like the excitement’s revving up in Port Charles. We’ll keep you posted as other GH news comes in. Stick with the ABC soap and don’t forget to check CDL often for the latest General Hospital spoilers, updates and news.