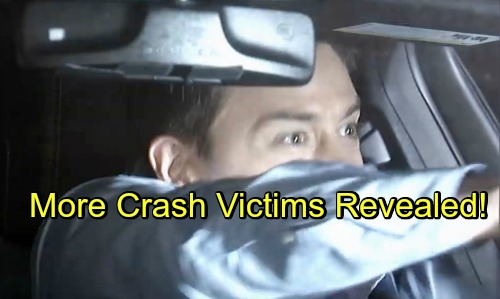 General Hospital (GH) spoilers tease that Michael (Chad Duell) and Nelle (Chloe Lanier) will face a shocking car accident. New details are emerging about this exciting twist, which doesn’t seem to involve the faked death plot at all. It looks like they’ll just encounter an out-of-control vehicle at the worst possible moment.

Michael will be a bit distracted thanks to a fight with Nelle, so that certainly won’t help the situation. However, the other driver will be the true cause of the crash. General Hospital spoilers say Nelle will do her best to warn Michael, but it’ll be too late. Another car will swerve into their path, so expect quite a collision.

Since Nelle’s nine months pregnant, the baby will obviously be a concern. Nothing points to a grim outcome for the kid just yet. That could mean Nelle’s son or daughter will make it out of this alive. Regardless, it doesn’t sound like Nelle’s injuries will be too severe. The other car will hit on Michael’s side, so he’ll take the most impact.

Of course, GH won’t put random strangers in the other vehicle. Instead, they’ll be familiar key players. After the accident, General Hospital fans will learn who’s in the other smashed car. This revelation will add to the drama and pull some surprising characters into the fallout.

Besides Michael and Nelle, there’s no confirmation on who else is involved. However, most Port Charles residents can be accounted for through surrounding spoilers. If someone’s involved in another crisis, he or she can’t really be stuck in this one. We have to look for characters who are suspiciously absent from the available info. Some of the teens seem likely candidates here.

Cameron (Cade McWatt) recently helped Oscar (Garren Stitt) make amends with Josslyn (Eden McCoy). It started a friendship and could easily lead to a joyride. Cam might steal Liz’s (Rebecca Herbst) car for the evening or convince Oscar to swipe Kim’s (Tamara Braun). They could go out cruising and lose control while speeding.

General Hospital spoilers say Josslyn (Eden McCoy) will grow fearful on August 2 and the next day, she’ll be absolutely livid. Perhaps Joss will find out Michael’s life is on the line first. Then, she could learn about Cameron or Oscar’s responsibility in the crash. Cam’s the bad boy, so he might be the real culprit. He’d at least be the one who pushed Oscar to break the rules and take unnecessary risks.

It’s worth mentioning that Liz will be worried around this timeframe. Drew (Billy Miller) will also do something bold while Julian’s (William deVry) behavior impresses Ava (Maura West). These characters and spoilers could fit with the crash aftermath.

Whatever the case, General Hospital viewers will see some jaw-dropping scenes. We’ll give you updates as other GH news comes in. Stay tuned to the ABC soap and don’t forget to check CDL often for the latest General Hospital spoilers, updates and news.