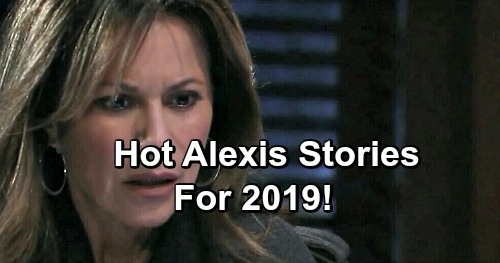 General Hospital (GH) spoilers reveal that many fans are reflecting on the past year of soap storylines and weighing in on social media. It’s always fun to look back at fun moments and appreciate what we enjoyed on GH. Of course, it’s also fair to consider what we’d change or would like to see more of. It seems like there’s one name that’s consistently popping up as underused and undervalued.

In Soap Opera Digest’s latest issue, their best and worst of 2018 list called GH out for not using Nancy Lee Grahn (Alexis). She won the “biggest waste of talent” category and certainly deserves the title. Alexis has been sidelined for far too long! It looked like she was all set to get an exciting Cassadine story, but that hasn’t gone anywhere so far.

Instead, Alexis exists to support people she cares about, meddle in her daughters’ lives and serve as a lawyer occasionally. Although Grahn crushes it every time Alexis hits the courtroom, we’d like to see more for this popular actress. Alexis even had to lose Finn (Michael Easton) to Anna (Finola Hughes) this year. She was finally excited about the possibility of a new romance, but it quickly fizzled.

Some Twitter users wave been voicing their support for both Grahn and Alexis. They’re hoping for huge changes in the coming year. “Please give Alexis a decent storyline in 2019,” one fan pleaded. Another viewer said, “Emmy winner Nancy w limitless potential of awesome character Alexis probably did draw the shortest straw this year…”

Naturally, this brings the question of what kind of story fans want for Alexis. It’s not too late to revive the mystery swirling around Alexis’ inherited watch. Perhaps once a few other stories wind down, they could pick that one up again. It’d be a great way to tie in some GH history and possibly set up some returns, too.

If General Hospital doesn’t want to take that route, they could always go with the obvious one. Is it time to reunite Julian (William deVry) and Alexis? These two aren’t even in a romance right now, but they still manage to light up the screen together. Their chemistry is just too good to pass up! GH has been stalling on a “Julexis” reunion, but maybe 2019 will be the year it finally happens.