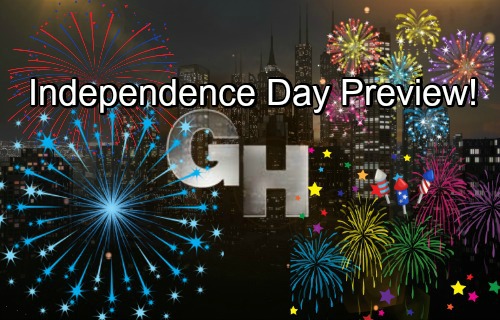 General Hospital (GH) spoilers tease that there’ll be plenty of fireworks as Port Charles celebrates Independence Day. Of course, PC’s celebration won’t fall on the real holiday. GH will air a repeat episode on the Fourth of July, so the town should be partying the day before and possibly after. We all know soap days tend to last longer than in the real world!

Whatever the case, there’ll be a lot happening on the ABC soap. We’ve got an Independence Day preview, so let’s talk about the action ahead. For starters, GH fans will see some “JaSam” family time. Jason (Steve Burton), Sam (Kelly Monaco) and Danny (T.K. Weaver) will head to the footbridge for some fun. As they bond over the light show in the sky, their little world will be peaceful and bright.

Sam and Jason shared a kiss the last time they watched fireworks together. “JaSam” fans certainly haven’t forgotten that New Year’s Eve smooch. Will they lock lips under this holiday’s dazzling display, too? It seems reasonable, especially since Sam’s starting to distance herself from Drew (Billy Miller).

Other General Hospital spoilers say Josslyn (Eden McCoy) and Oscar (Garren Stitt) will hang out in the park. They’ll be joined by a familiar character with a brand-new face. Cade McWatt will debut as a Cameron recast. He’s in same age bracket as the other teens now, so Oscar may have some competition. GH buzz suggests that Josslyn could find herself stuck in a love triangle soon.

Meanwhile, Franco (Roger Howarth) and Liz (Rebecca Herbst) will gaze at fireworks on their doorstep. They’ll keep things low-key and just enjoy the moment. In the weeks ahead, “Friz” will undergo some changes within their family. As the boys grow older and old relatives resurface, it’ll be a lot to take in. Who knows? Maybe Franco and Liz will even add a baby down the road!

General Hospital spoilers say Julian (William deVry) and Kim (Tamara Braun) will spend the evening together as well. Brad (Parry Shen) and Lucas (Ryan Carnes) will join them at the Metro Court, so most PC residents will have somebody to celebrate with. Over with Peter (Wes Ramsey), he’ll beg Nina (Michelle Stafford) to release him. Will she really be willing to give Peter his freedom?

Independence Day would be the perfect time, but we wouldn’t count on it just yet. Over the next couple weeks, General Hospital spoilers say Nina will struggle to keep secrets from Valentin (James Patrick Stuart). That points to more suffering for Peter, but he’ll have to get out of that cabin at some point!

GH viewers won’t want to miss all the summer bombshells. We’ll give you updates as other news comes in. Stay tuned to the ABC soap and don’t forget to check CDL often for the latest General Hospital spoilers, updates and news.