General Hospital (GH) spoilers reveal some big scheduling news – viewers of the ABC sudser should prepare for an extremely short week between August 27 and August 31 as the show has run short of new episodes to show fans. This GH news was confirmed by Nathan Varni on social media as fans can see below.

During the week of August 27 General Hospital will only air on Monday, August 27 and Tuesday, August 28. Wednesday through Friday, August 29-31 will be repeat episodes, or encores as Mr. Varni refers to them.

The break may seem surprising to GH fans since there is so much currently happening in Port Charles. Kristina Davis Corinthos (Lexi Ainsworth) just returned, using the excuse that her family needed her; but spoilers tease there is a lot more to her coming home. The Corinthos family is dealing with what they think is the tragic loss of baby Jonah and Mike Corbin’s (Max Gail) rapidly declining health. 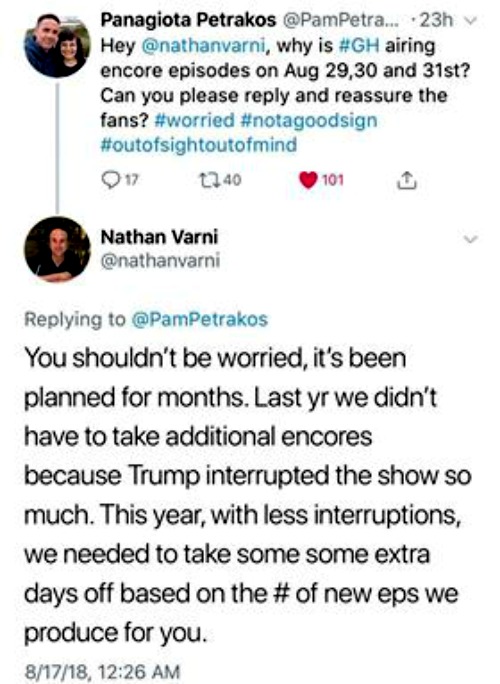 General Hospital sources indicate things are barely beginning with Ava Jerome (Maura West) and her revenge on Dr. Griffin Munro (Matt Cohen) and her daughter, Kiki (Hayley Erin). She just got Griffin suspended and promised that Kiki was also going to pay, but it is unclear how she will exact vengeance on her own child.

Franco Baldwin (Roger Howarth) and Elizabeth Webber (Rebecca Herbst) have been planning their wedding and with Liz’ childhood friend, Terry (Cassandra James) back on this week’s new GH episodes, August 13-17; what could possibly go wrong that could cause Liz to be so troubled?

There are so many epic storylines unfolding in Port Charles right now, how do you feel about the ABC network not producing enough new episodes and being forced to cut the week short – which encore repeat episodes do you think they will show?