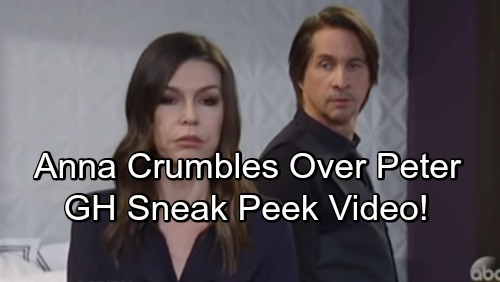 General Hospital (GH) spoilers tease that Anna (Finola Hughes) will remain distraught over all her Peter (Wes Ramsey) problems. However, she’ll realize there was a lot left unsaid with Finn (Michael Easton). Things were pretty intense on the pier, so Anna will want to speak with him again and see there they stand. Tuesday’s sneak peek video offers a glimpse of what’s ahead.

Finn will happily welcome Anna and agree that talking this through is a good idea. Of course, Anna’s mind will quickly wander to Peter. She’ll get sidetracked from discussing her relationship with Finn and start unloading all her Heinrik drama instead.

GH spoilers say Anna will provide updates on the case against Peter and what could happen next. She’ll insist she’s not cooperating, but she’ll realize he could go down anyway. Anna understands that Peter went down a dark road, but she just doesn’t think it’s his fault. Faison (Anders Hove) was a terrible human being who treated his son like garbage.

Anna will still think Peter deserves a shot finding a new path. Nevertheless, she’ll be upset about the fact that Peter loathes her. Anna won’t blame him, but it’s difficult to look her child in the eyes and realize he feels only hatred.

After rambling for a bit, Anna will suddenly stop herself. She’ll determine that Finn doesn’t need to hear all this. Anna will think she should stop venting and keep Finn out of it. That’s when Finn will catch Anna off guard. He’ll contend that Anna’s right where she needs to be. Finn will assure Anna that he’s exactly the person she’s meant to be with.

It looks like Finn means more than serving as a shoulder to cry on here and now. He has deep feelings for Anna, so he wants to be with her romantically. General Hospital spoilers hint that they’ll talk about that on Tuesday. They should take a big step forward, so “Fanna” fans will want to tune in.

Anna may fear that she’s too complicated and has too much going on in her life. She doesn’t want to drag Finn down, but he’ll be 100-percent committed to helping her. Finn will think supporting each other is what a solid relationship’s all about.

General Hospital spoilers say these two will build toward something beautiful this summer. Their romance will bloom with a little assistance from Robert (Tristan Rogers). We’ll keep you posted as other GH news comes in. Stick with the ABC soap and don’t forget to check CDL often for the latest General Hospital spoilers, updates and news.