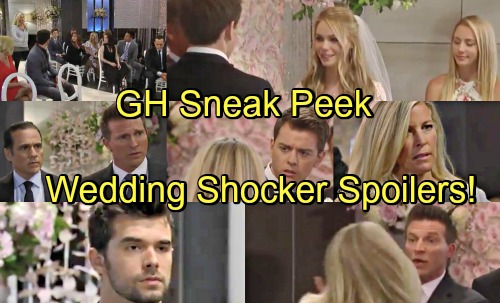 As Carly tries to shut down the ceremony, a stunned Josslyn (Eden McCoy) will call out to her mom. She’ll realize things are about to get ugly for Carly, so it’d be best to put a stop to this now. Before Joss can say anything more, Sonny will try to take charge of the situation. He’ll leap to his feet and head over to calm his raging wife.

Sonny will ask Carly what she’s doing, but she’ll fire back that he already knows. She’s made it crystal clear that she hates Nelle and this whole marriage idea. There’s a big connection between Carly’s mistake with Morgan (Bryan Craig) and her current intervention with Michael.

Carly made a painful admission to Kevin (Jon Lindstrom) in one of their therapy sessions. She feels like Morgan (Bryan Craig) died because she wasn’t willing to rock the boat. Carly wanted to show that she trusted Morgan, so she didn’t act when the warning signs appeared. She believes Michael could be in just as much danger and that’s why she had to step up.

In other words, Carly refuses to stand by and repeat history. She doesn’t want to lose another son because she trusted him when she shouldn’t have. Carly will push past Sonny, so General Hospital spoilers say Jason will try his luck. He’ll look panicked as he grabs Carly and tries to lead her out.

Jason will insist that Carly needs to come with him, but she’ll declare that she’s not going anywhere. If Jason hoped to sneak Carly back in Ferncliff, it’s much to late for that. She’s ranting in a room full of witnesses. Besides, drugged Mary Pat (Patricia Bethune) knows exactly what Carly did and will inevitably make her pay for it.

Of course, Carly knew the risks when she made her getaway. What happens next doesn’t really matter to her. Carly would spend the rest of the life at Ferncliff if it meant keeping Michael alive. She’ll tell Jason not to stop her as Ava (Maura West) grabs her phone. It looks like Ava may be calling the cops, but there’s already a detective on site.

Chase (Josh Swickard) will soon join the madness, but not before Carly warns Michael about Nelle’s deadly danger. Unfortunately, Carly’s efforts will be all for naught. After Nelle’s rushed to GH with severe pain, Michael will stick to his plan and marry her anyway.