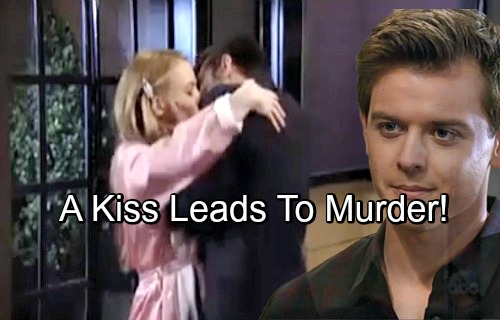 After all, Carly just escaped from a mental institution for the criminally insane. Now she’s stalking her “victim,” so it actually works to Nelle’s advantage. She can put on her “poor me” act and make Carly seem like the villain here.

Thanks to Carly’s tirade, Nelle will have to change her wedding venue. She’ll claim to have some abdominal pain, so Michael (Chad Duell) will make sure she’s rushed to GH. Michael will naturally be kind and protective during this ordeal. He’s manipulating Nelle, but there’ll be genuine concern for his child mixed in.

Despite her earlier doubts, Nelle will start to think Michael truly loves her. She’ll try to convince herself that she can settle down and be happy with her rich, caring “baby daddy.” As a result, General Hospital spoilers say Nelle will make a decision. She’ll determine that Carly isn’t going to wreck this for her.

Once Nelle calls Michael over to her hospital bed, she’ll insist they should say their vows right then and there! Michael will get on board with the idea, so they’ll officially become Mr. and Mrs. Corinthos. However, it won’t be long until Chase (Josh Swickard) stops by to stir the pot. He’ll try to plant another kiss on Nelle, but she’ll refuse to let him this time.

Nelle will contend that Chase is just trying to turn her against Michael. She’ll snap that Michael loves her and they’re going to build a life together. Chase will likely reiterate that Nelle’s wrong. He may urge her to call him once she wises up.

General Hospital spoilers say Nelle will indeed get a clue moments later. GH fans will recall that Josslyn (Eden McCoy) caught Nelle and Chase kissing. Nelle acted like he just obsessed and out of control. She put all the blame on Chase, which left Joss torn. It seems she’s starting to see the light about her supposed friend, but she doesn’t quite want to believe it.

Regardless, Josslyn’s loyalty lies with Michael. She’ll decide to blab about the kiss she witnessed, but she’ll get a surprising reaction. As Nelle eavesdrops, she’ll be taken aback as well. General Hospital spoilers say Michael will remain perfectly calm. He’ll tell Joss not to worry about it and express no anger whatsoever.

Nelle obviously didn’t want Michael to blow his top and cut her out of the picture. Nevertheless, she probably would’ve welcomed a little jealousy. Michael’s tepid response will finally settle something for Nelle. She’ll realize he doesn’t care about her at all and probably never will.

Nelle may even suspect Michael’s playing her somehow. Whatever the case, Nelle will know what she has to do. In her mind, Michael will seal his own fate. Nelle will start working on a devious plan, which presumably involves Michael’s gruesome murder.

GH spoilers state that Nelle will turn for Chase for help, but she won’t realize he’s in on Michael’s plot. Nelle’s takedown is rapidly approaching, so we’ll give you updates as other news comes in. Stay tuned to the ABC soap and don’t forget to check CDL often for the latest General Hospital spoilers, updates and news.