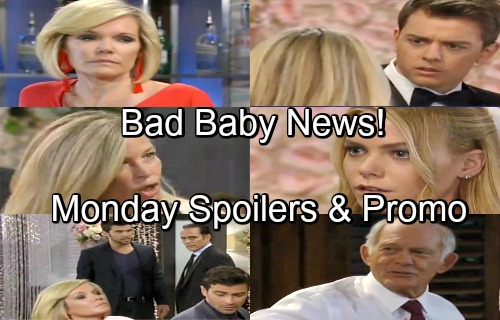 General Hospital (GH) spoilers for Monday, July 16, tease that Carly (Laura Wright) will have a major meltdown at the wedding. She just sedated Mary Pat (Patricia Bethune) and somehow broke out of Ferncliff. Carly knows there’ll be consequences for her escape, but she doesn’t care. All that matters right now is warning Michael (Chad Duell) about the mistake he’s making.

Nelle will give Carly a cold glare as the chaos unfolds. Meanwhile, Michael will look completely shocked over his mom’s actions. General Hospital spoilers say Carly will call Nelle dangerous and deadly. She’ll insist that Michael can’t marry this psycho and put himself in harm’s way.

Cue the sudden abdominal pain for Nelle! Whether it’s real or fake, she’ll double over and bring the mayhem to a halt. However, Nelle won’t give up on her goal of tying the knot. General Hospital spoilers say she’ll insist on marrying Michael right away, so she’ll do it from her hospital bed at GH.

Over with Carly, she’ll be hauled back to Ferncliff. Sonny (Maurice Benard) will have a little chat with Chase (Josh Swickard) and push for leniency, but that plan will fail. Chase will suggest that anything he does to skirt procedure will only make this worse.

Other General Hospital spoilers say Griffin (Matt Cohen) will be a bit confused. He’ll feel like Ava’s (Maura West) avoiding him, so he’ll call her out on it. Ava smelled Oscar’s (Garren Stitt) familiar cologne, so she’s clearly rattled at the moment. She’ll assure Griffin that everything’s fine, but he’ll continue to suspect that something’s wrong.

Ava will also have a tense run-in with Bobbie (Jacklyn Zeman) on Monday. She’ll do something that sets Bobbie off, so GH fans can expect a fierce warning. Bobbie will promise that Ava’s behavior will come back to bite her. She’ll think the sneaky blonde’s going to get what she has coming eventually.

Elsewhere, Mike (Max Gail) will pass the time by quizzing other guests. He’ll corner Sam (Kelly Monaco) and Drew (Billy Miller) to ask how they met. Instead of loading poor Mike down with a complicated story, they’ll probably just give him a vague explanation. There’s no point in making Mike’s head spin when he’ll just forget in an hour.

At GH, Brad will seem concerned as he delivers baby news. He’ll approach Lucas (Ryan Carnes) with a worried expression, so is there an adoption problem? Let’s hope Brad and Lucas can get whatever it is worked out! We’ll give you updates as other details emerge. Stay tuned to the ABC soap and don’t forget to check CDL often for the latest General Hospital spoilers, updates and news.