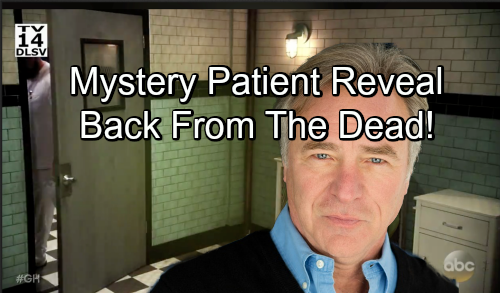 General Hospital (GH) spoilers tease that we’ve got some new details on a mysterious storyline. Once Carly (Laura Wright) got settled in Ferncliff, she began to hear another patient crying out. There’s a man stuck in the room next to hers, so Carly’s been deciphering his Morse Code messages and knocking back that she can’t help. She’s got enough to deal with, so she’d rather be left alone.

Of course, Carly assumes the guy’s crazy and dangerous. After all, Ferncliff is a mental institution for the criminally insane! However, there’s a good chance Carly’s neighbor isn’t quite so menacing. Like Carly, he probably just faced a fierce enemy and some terrible luck.

GH still hasn’t confirmed the mystery man’s identity, but some casting news offers a big clue. General Hospital spoilers reveal that Casey Biggs is joining the show as Dr. Lasaris. He’s a staff member at Ferncliff, so you can bet he’ll play a significant role in Carly’s story.

Do you notice anything interesting about this character’s name? “Lasaris” is an unusual choice. It’s not the kind of name you make up off the top of your head. If this doc’s name wasn’t important, GH would’ve gone with something more common. Instead, this is surely meant to be a hint.

GH fans will recall that Peter August’s (Wes Ramsey) name also provided story clues as CDL exclusively pointed out. Many viewers were able to guess the identity of Heinrik Faison based on the name alone. In The Severed Branch, vengeful Octavian went after his father. A Roman emperor also went by the name Octavian before changing it to Augustus. Peter chose August as his last name, so the connection was clear.

We’ve established that General Hospital plants these little nuggets, so what are they trying to convey through Dr. Lasaris? It reminds us a lot of Lazarus, a biblical character who miraculously rose from the dead. It seems likely that a deceased GH character will get back in the mix soon.

General Hospital buzz suggests that Kevin’s (Jon Lindstrom) twin brother, Ryan (Jon Lindstrom), is involved here. Ryan was killed off, so he’d fit the bill. We also know the mystery patient will have a familiar face, which backs up the whole twin idea.

Since Kevin’s been exhibiting some strange behavior, Ryan may be the one treating Carly. Meanwhile, his poor brother’s probably being held against his will! If so, who will save Kevin and how will Dr. Lasaris fit in the storyline? Did he bring Ryan back to life and help him pull off the swap?

We’ll give you updates as other GH info comes in. Stay tuned to the ABC soap and don’t forget to check CDL often for the latest General Hospital spoilers, updates and news.