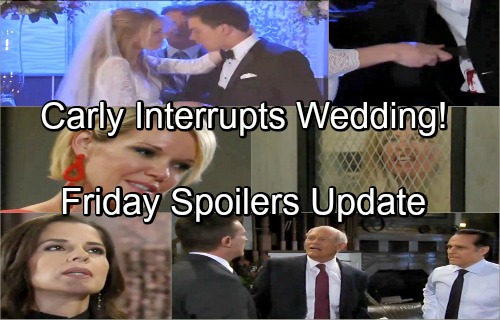 General Hospital (GH) spoilers for Friday, July 13, tease that Michael (Chad Duell) and Nelle (Chloe Lanier) will keep secrets on their big day. GH fans know Michael’s manipulating Nelle in hopes of taking her down. Nelle’s falling right into his trap, so she’s plotting Michael’s murder. It sounds terrible, but it’s exactly what Michael had in mind.

Friday GH episode will bring a disturbing fantasy for one character. Nelle’s a good option since she’s angry and eager to kill Michael. It’s also possible Carly (Laura Wright) will fear the worst and let her mind sink to this. Whatever the case, we’ll get a scene where Nelle stabs Michael at their nuptials. She’ll jab a knife in Michael’s abdomen and leave the guests in shock over the bloody aftermath.

However, Nelle or Carly will snap out of it moments later. Thankfully, the real wedding won’t be as traumatic! Before Michael and Nelle can tie the knot, the final preparations have to be made. That includes getting all the attendees dressed up and in their seats on time. Brad (Parry Shen) will have to hurry Lucas (Ryan Carnes) along at GH. He won’t want to miss what he assumes is Nelle’s fairytale ending with Michael.

Lulu (Emme Rylan), on the other hand, will think this seems more like an unlucky beginning. When she realizes the date, she’ll express confusion to Ned (Wally Kurth). It’s awfully weird to get married on Friday the 13th. Lulu will wonder why Michael and Nelle picked the worst possible day for this. She’ll probably think it’s a sign of trouble to come.

Meanwhile, Mike (Max Gail) will ask what event he’s headed to. He’ll forget about the nuptials, so Jason (Steve Burton) will fill him in. Sonny (Maurice Benard), Mike and Jason will ultimately face this wedding together. Mike should cheer the happy couple on, but Jason and Sonny will just hope Michael’s got a grip on the danger.

Other General Hospital spoilers say Ava (Maura Wright) will make a few waves. She’ll sarcastically talk about Michael and Nelle being the perfect match. Ava won’t believe it for a second, but she’ll have to give Nelle props for pulling this off. She’s impressed that Nelle’s worming her way into the Corinthos clan so quickly.

Of course, Nelle plans to get out of the family just as fast. Her murder plot will have to happen quickly or else Michael will lock down that will. Since he intends leave everything he has to the baby, Nelle wouldn’t see a dime herself. Nevertheless, Nelle will have to focus on this marriage first. She needs to marry Michael ASAP or everything will fall apart.

At Ferncliff, Carly will become frantic over Michael’s perilous situation. She’ll determine that she can’t stand by and let him make this mistake. Carly understands that Michael’s scheming, but she’ll worry he won’t live long enough to see results.

As Carly’s fears spiral out of control, she’ll yell for a staff member to let her out. One way or another, Carly will indeed make her escape. Perhaps she’ll make up an excuse that convinces Kevin (Jon Lindstrom) let her leave her room. Then, Carly can find some hidden exit and bolt.

General Hospital spoilers say Carly will interrupt the wedding, so that’s sure to bring quite a cliffhanger. Over with Drew (Billy Miller) and Sam (Kelly Monaco), they’ll establish that they’re still family. Their divorce didn’t change that and it never will.

GH viewers can expect Sam and Drew to move on soon. Their new romances will bring fireworks and plenty of drama! We’ll give you updates as other news comes in. Stick with the ABC soap and don’t forget to check CDL often for the latest General Hospital spoilers, updates and news.