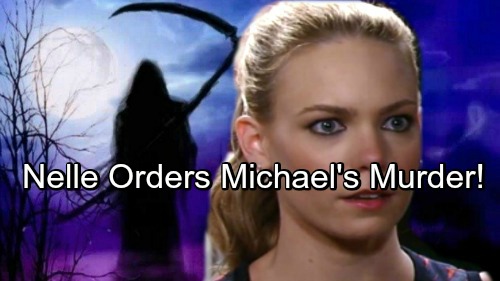 General Hospital (GH) spoilers tease that Chase (Josh Swickard) and Michael’s (Chad Duell) scheme is right on track. They’re quickly making progress in their Nelle (Chloe Lanier) takedown efforts. Step one was getting Nelle to accept the proposal. Michael also moved up the wedding date and got Nelle to sign a prenup. That checked steps two and three off the list.

Of course, Chase has been planting doubts along the way. That’s pretty much been his role so far, but he should take on a bigger one soon enough. Nelle will eventually be completely poisoned against Michael. She’ll assume that if she stays on this path, she’ll end up broke and baby-less. Michael has two powerful, wealthy families on his side. Nelle will assume he could strip her of custody in a heartbeat.

Once Nelle’s fully convinced, it’ll be time for the riskiest phase of this plan. General Hospital spoilers say Michael intends to fake his death, so it’ll be Chase’s job to set that in motion. It seems likely that Nelle will suggest an “accident” and urge Chase to prove his love by staging it. Nelle may insist that they can be together if Chase takes Michael out of the picture.

Chase might record Nelle ordering a hit, which would be some serious ammunition. Jordan (Vinessa Antoine) approved the details of their plot, so everything should be legit. If Chase lets Nelle come up with all the deadly ideas, she may not have a case for entrapment. Chase believes Nelle got away with Zach’s murder, so it’d be sweet revenge to nail her for attempting to murder Michael.

However, the plan won’t stop there. Since Michael’s actually going to fake his demise, the apparent sting operation should bring some real shockers. When Nelle gets updates on Michael’s “death,” she’ll undoubtedly turn on the waterworks and pretend she’s distraught. Imagine her surprise when Michael later reveals he’s alive and well! Nelle should be shaking in her boots over this stunning GH comeback.