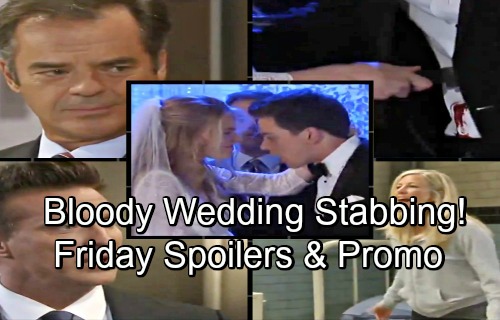 General Hospital (GH) spoilers for Friday, July 13, tease that Drew (Billy Miller) and Sam (Kelly Monaco) will share a warm moment. They may be divorced now, but that doesn’t mean they have to avoid each other. Sam will assure Drew that they’re still family and always will be. Despite all the complications they’ve faced, these exes seem to be in a good place.

At GH, Lucas (Ryan Carnes) and Brad (Parry Shen) will look spiffy in their suits. Brad will note that the wedding’s in less than an hour and shut down Lucas’ idea to squeeze something in beforehand. Since Brad’s one of the few people who actually likes Nelle (Chloe Lanier), he won’t want to be late and let her down.

Meanwhile, Ned (Wally Kurth) will get ready to officiate. He’ll speak with a puzzled Lulu (Emme Rylan) before the nuptials kick off. General Hospital spoilers say Lulu will mention the bizarre wedding date they’ve chosen. Who gets married on Friday the 13th? Michael (Chad Duell) and Nelle apparently!

At home, Sonny (Maurice Benard) will prepare for this dreaded occasion. Mike (Max Gail) and Jason (Steve Burton) will be on hand to chat with him. When Mike briefly forgets what’s happening, Jason will offer a gentle reminder. He’ll point out that Michael’s getting married, so they’ll join the other guests eventually.

Elsewhere, Ava (Maura West) will call this a “true love match.” Perhaps she’ll be pushing Nelle’s buttons before the ceremony. Ever since Nelle chose to blackmail Ava, things have been tense between them. Ava’s miffed with Nelle most of the time, but she seems to admire her determination and talent as a manipulator. She also knows this wedding will infuriate Carly (Laura Wright), so she’ll be all for it.

Speaking of Carly, she’ll indeed be having a fit at Ferncliff. The longer Carly mulls over this marriage, the more she’ll want to shut it down. General Hospital spoilers state that Carly will have a major outburst in her room. She’ll shout that she wants out of there and insist that someone needs to open the door.

Friday’s preview video shows Nelle stabbing Michael in the abdomen. He doubles over as blood gushes out of his white shirt. This obviously won’t be real, so maybe it’ll be Carly’s nightmare. Then again, it could be Nelle’s vengeful fantasy! Michael wants to leave the baby everything in his will, so Nelle clearly plans to kill him before he has the chance. She’ll likely call on Chase (Josh Swickard) soon.