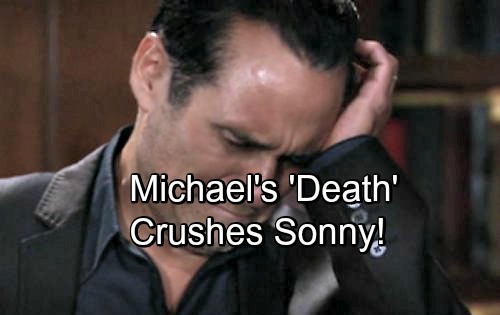 General Hospital (GH) spoilers tease that Sonny (Maurice Benard) will have a lot to juggle over the next few weeks. For starters, Sonny has to keep a close eye on Mike (Max Gail) and do his best not to agitate him. That’ll be tough since Sonny needs a little more corpse info. Sonny knows it’s under the pub foundation, but it’d be helpful to know exactly where that body was placed.

Meanwhile, Julian’s (William deVry) suspicions could grow. Sonny wanted to buy Julian out, but his offered was rejected. Perhaps he’ll try sweetening the pot soon. That could leave Julian wondering why Sonny’s so determined to score Charlie’s. This just isn’t a good situation for Sonny to be in.

To make matters worse, there’ll be more Carly (Laura Wright) chaos to tackle. After Carly ditches Ferncliff and crashes the “Melle” wedding, Sonny will grow increasingly concerned. He may worry that Carly just extended her Ferncliff stay, which is probably true.

Carly’s going to look like an obsessed nut job, so Sonny will corner Kevin (Jon Lindstrom) and rip into him. He’ll feel like Kevin should’ve been keeping a closer eye on his patient. Perhaps Kevin was too busy trying to hide the identity of Carly’s next-door neighbor!

However, Sonny’s the one who’ll end up feeling guilty over distractions. He’s got a lot on his plate, so he won’t see the next GH blow coming. General Hospital spoilers hint that Michael (Chad Duell) will fake his death and leave Sonny in shock. At Chase (Josh Swickard) and Jordan’s (Vinessa Antoine) request, Michael hasn’t filled his parents in on that part of the scheme.

Maybe the cops are looking for some genuine reactions after Michael’s “demise.” They have to sell this to Nelle, so that may be the only way. On July 27, Sonny will ponder a disaster and consider how this horror could’ve unfolded. He’ll believe things went terribly wrong, so this could be the aftermath of Michael’s “death.”

A distraught Sonny will undoubtedly fret about telling Carly. He’ll be in bad shape, but Jason (Steve Burton) should put a stop to that. Michael couldn’t resist spilling the beans to the person he’s closest to. As Sonny breaks down, Jason may blurt out that it’s a scam. General Hospital spoilers say Jason will be forced to come clean on the new GH episode of July 27, which is the same day Sonny will be a mess.

It all adds up to some great drama! We’ll give you updates as other GH news comes in. Stay tuned to the ABC soap and don’t forget to check CDL often for the latest General Hospital spoilers, updates and news.