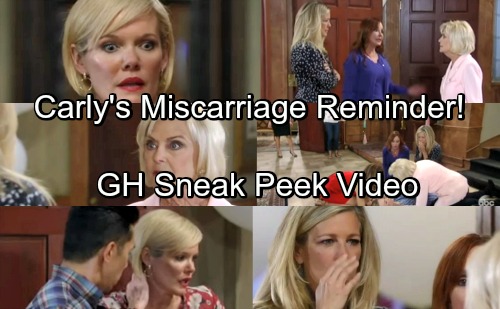 General Hospital (GH) spoilers tease that Nelle (Chloe Lanier) will be out cold following her altercation with Carly (Laura Wright) and dramatic staircase fall. Monday’s sneak peek video reveals that there’ll be some terrifying moments for the baby shower guests. They’ll all gather around wounded Nelle as they try to figure out what happened.

Monica (Patty McCormack) will immediately rush over and start calling Nelle’s name. She’ll ask if Nelle can hear her as she shines a light in her eyes. Meanwhile, Olivia (Lisa LoCicero) will support Nelle’s head and grow concerned about a deadly outcome.

Carly will definitely have major fears, too. Nelle will remain unconscious, but Carly will reassure her anyway. She’ll insist that Nelle and the baby are going to be OK. However, Carly’s words of comfort won’t go over well with Monica. General Hospital spoilers say Monica will get fed up and ask somebody to take Carly out of there. She’ll be fed up with the way Carly’s handled this whole afternoon.

Bobbie (Jacklyn Zeman) will quickly pull Carly off to the side and Josslyn (Eden McCoy) will push for an explanation. She’ll want Carly to walk her through exactly what went down. Carly will mention the blanket Nelle was holding. After Carly grabbed it, Nelle grabbed it back and took a tumble.

It was an accident since no shoving was involved, but it wasn’t the best idea to start grabbing things at the top of the stairs. As Monica will soon point out, Carly should’ve known better. Until then, Brad (Parry Shen) will get off the phone and run in the room. He’ll note that there was an ambulance in the area, so it’s pulling up to the grounds right now.

Sirens will be heard just outside, so at least Nelle will get help fast. General Hospital spoilers say Ava (Maura West) will check on the kids upstairs. She won’t want them to be frightened over the paramedics. As Ava heads upstairs, Brad will prepare to ride in the ambulance and Joss will want to join him. She’ll give Carly a dirty look and suggest that someone has to take care of Nelle.

Carly will get emotional as she whispers to Bobbie. She’ll be desperate for this baby to make it. After reassuring Nelle once more, Monica will march over to confront Carly. She’ll hint that maybe this wasn’t an accident. Monica will remind Carly that she’s been trying to get Nelle out of Michael’s (Chad Duell) life from day one.

Carly will believe that’s a ridiculous accusation. She’ll insist that she’d never hurt that baby or even Nelle. Carly will think there’s a big difference between verbal attacks and a physical one. Still, Monica will blast Carly for all her recent outbursts. She’ll think Carly’s been out of control!

General Hospital spoilers say Monica will offer a grim reminder of the past. Carly lost a baby of her own on those steps 20 years ago, so Monica will stress the importance of safety on staircases. She’ll be miffed that Carly would engage in such a dangerous argument with a pregnant woman.

Bobbie will want to head over to GH with Nelle, but Monica will have other plans for Carly’s evening. She’ll declare that Carly’s not going anywhere and add that she’s calling the cops. General Hospital fans won’t want to miss all the action. We’ll give you updates as other news comes in. Stick with the ABC soap and don’t forget to check CDL often for the latest General Hospital spoilers, updates and news.