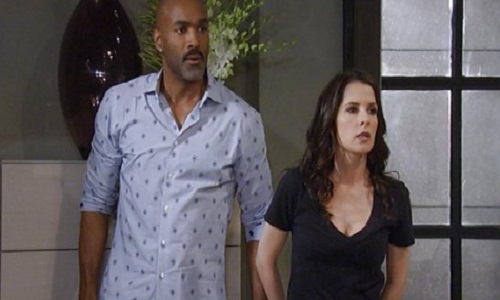 General Hospital (GH) spoilers tease that Curtis (Donnell Turner) and Sam (Kelly Monaco) will try to talk their way out of a tight spot. They decided to do some snooping in Peter’s (Wes Ramsey) old room, which required breaking in. That was no problem for Sam. She took care of business and they were able to walk right in.

Unfortunately, neither one of them realized Margaux (Elizabeth Hendrickson) was the room’s new occupant. She also just happened to return as they were searching. Talk about some bad luck! Monday’s GH sneak peek video offers a glimpse of the trouble ahead. General Hospital spoilers state that Margaux will demand answers, so Sam and Curtis will have to provide them quickly.

Before an explanation can be given, Margaux will whip out her phone and make a couple pictures. Sam will insist that they’re private investigators and wonder if that’s really necessary. She’ll try to stay calm along with Curtis. Their best bet is to act nonchalant and make Margaux believe everything’s fine.

However, Margaux will contend that this is breaking and entering. She’ll announce that she just sent their photos to the DA’s office. Margaux will state that they can explain themselves to the cops. A few moments later, Sam and Curtis will hand over some identification. They’ll show Margaux proof that they’re P.I. partners and suggest there’s no need to call the police.

Curtis will maintain that they’re legit. He’ll state that they’re consulting on a PCPD case and Sam will back him up. Margaux will remain suspicious, but Sam will drop Jordan’s (Vinessa Antoine) name in the conversation. She’ll reveal that they’re searching for clues about Peter August (Wes Ramsey) aka Heinrik Faison.

Margaux will grow more agitated at that point. She’ll struggle to believe that the commissioner would ask them to search the DA’s hotel room. Curtis will defend the move by suggesting that they were given some leeway in their investigation. He’ll hope that’ll be enough to settle Margaux down.

Sam will pipe up that they had no idea this was the DA’s room, but Margaux will wonder how they even got access. This will all seem pretty fishy to her and rightly so. Margaux will be surprised that the hotel would let them in her room without notifying her first. Sneaky Sam will ask how else Margaux thinks they would’ve gotten in. She’s a sly one!

After more apologies, Margaux will finally let it go. She’ll plop down on the sofa to watch them work. Margaux will want to see if Curtis and Sam are any better at their job’s than PC’s finest. It sounds like she’s throwing a little shade, but who could blame her? The cops indeed drop the ball most of the time.

General Hospital spoilers say Sam and Curtis will be glad they dodged a bullet. Now they just need to come up with some evidence regarding Peter’s whereabouts. Can they find a clue or two? We’ll give you updates as other GH news comes in. Stick with the ABC soap and don’t forget to check CDL often for the latest General Hospital spoilers, updates and news.