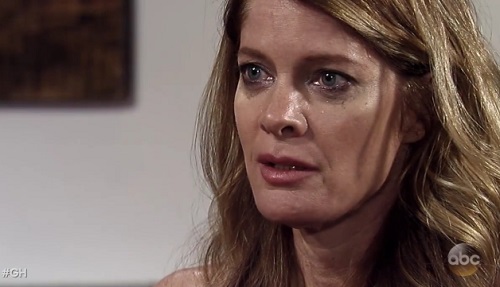 General Hospital (GH) spoilers tease that Valentin (James Patrick Stuart) may have a big decision to make. It looks like he’ll find out what Nina’s (Michelle Stafford) been up to soon. After she offers some clues in the heat of the moment, Valentin may realize Peter’s (Wes Ramsey) being held hostage.

Of course, it probably won’t take long for Valentin to put the whole story together. Liesl Obrecht (Kathleen Gati) has a reputation for causing chaos and she certainly had a motive to kidnap Peter. She’s also grown closer to Nina since Nathan’s (Ryan Paevey) death. Valentin will likely figure out that Nina pitched in on Liesl’s scheme. That brings us to a crucial choice.

Valentin could choose to ignore what’s happening and let the ladies carry on. He’s tried to watch out for Peter in the past, but his marriage is on the line now. You’d better believe Valentin will put his future with Nina first.

However, it’s possible Valentin will try to have it both ways. He might rescue Peter and insist it’s for Nina’s own good. She could land in hot water if this goes on much longer. In fact, Valentin may decide to use this as leverage. Let’s consider how he could manipulate the situation and perhaps save his relationship.

Valentin might convince Peter to keep his mouth shut about who held him captive. Whether Valentin’s to blame or not, Peter will inevitably be apprehended again. Valentin may work out some way to get him off the hook and in exchange, Peter could keep Nina and Liesl’s names out of it.

Nevertheless, this could be a secret to hang over Nina’s head. All Valentin would have to do is say the word and Peter would start talking. Even Valentin himself could squeal if has evidence against the captors. Nina might suggest that he wouldn’t dare, but Valentin could argue that she shouldn’t test him.

This GH plot would certainly be risky and a bit extreme, but desperate times call for desperate measures. Valentin needs Nina in his life, so he could force her to reunite if she wants to keep her freedom. General Hospital spoilers say Nina will explode over something in the week ahead. It could easily be Valentin’s blackmail!

It sounds like the excitement’s revving up in Port Charles. We’ll give you updates as other General Hospital news comes in. Stay tuned to ABC’s GH and don’t forget to check CDL often for the latest General Hospital spoilers, updates and news.