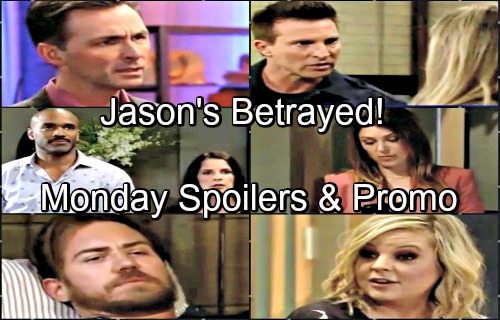 General Hospital (GH) spoilers for Monday, June 25, tease that Peter (Wes Ramsey) will be at the end of his rope. He’s starving, exhausted and battling extreme pain. Peter will probably just tell Liesl (Kathleen Gati) to kill him and be done with it. He doesn’t know how much more of this he can take.

However, Dr. O will suggest that keeping Peter alive is more interesting. She enjoys torturing Peter, so she’ll keep her scheme going strong. Meanwhile, Valentin (James Patrick Stuart) and Nina’s (Michelle Stafford) conflict will continue. He can tell she’s hiding something, so he’s willing to help. Things may not go well for Nina if she doesn’t let Valentin in the loop.

Of course, Nina assumed a blackmail plot was brewing. On Monday, she’ll sarcastically talk about how it’s Valentin’s most romantic gesture yet. GH fans know Valentin is a desperate man, so he’d certainly be willing to go that far. If Valentin figures out Nina’s involvement in the Peter plot, you can bet he’ll use it to his advantage.

Other General Hospital spoilers say Anna (Finola Hughes) will have a chat with Felicia (Kristina Wagner). She’ll open up about her son’s disappearance and all the drama before it. Felicia will offer some comfort in Anna’s time of sorrow. This has all been pretty overwhelming for Anna, so she should appreciate the support.

Meanwhile, Jordan (Vinessa Antoine) will reach out to Maxie (Kristen Storms). She’ll have a few more questions about Peter, so Maxie will provide answers if she can. Once that’s out of the way, Maxie will seek some advice. It may tie in with Maxie’s attempt to put Peter behind her and move on with her life.

Over with Curtis (Donnell Turner) and Sam (Kelly Monaco), they’ll be in hot water. Although the authorities did a thorough search of Peter’s room, the P.I. duo wanted to check things out for themselves. Unfortunately, Margaux (Elizabeth Hendrickson) caught them red-handed. This is apparently her room now, so she’ll grab her phone to turn them in.

Margaux will insist that as far as she’s concerned, this is breaking and entering. Sam will try to think fast and wiggle out of trouble. She may come up with an excuse to get them off the hook. At Ferncliff, Jason (Steve Burton) will grow fearful. He’ll worry that Kevin’s (Jon Lindstrom) going to rat him out, but Carly (Laura Wright) may disagree.

After all, Kevin lied for Jason initially. Squealing now would mean admitting his deception. At this point, it’s in Kevin’s best interest to stay quiet. Jason should really be more worried about Mary Pat (Patricia Bethune), who will indeed blow his plan later this week.

Still, there’s that mysterious patient down the hall to consider. Who’s screaming in that room and will Carly crack the case? We’ll give you updates as other General Hospital news comes in. Stay tuned to ABC’s GH and don’t forget to check CDL often for the latest General Hospital spoilers, updates and news.