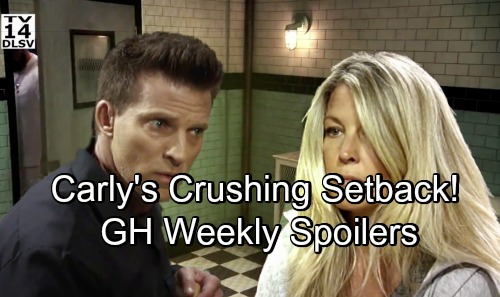 General Hospital (GH) spoilers for the week of June 25-29 tease that several Port Charles residents will face tough blows. For starters, Jason’s (Steve Burton) connection to Carly (Laura Wright) will be discovered. He’ll be kicked out of Ferncliff, so that’ll bring some disturbing moments for Caroline – as Mary Pat (Patricia Bethune) likes to call her. That’s just one more way she drives Carly up the wall!

Carly won’t know how she’s supposed to carry on without Jason’s support. Once Jason’s thrown off the premises, he’ll immediately worry about Carly’s safety and sanity. There’s no predicting what they’ll do to her now. Jason will decide he has to focus on his plan to get Carly out of there ASAP. He’ll really rev up his efforts, so stay tuned for his determination.

Meanwhile, Alexis (Nancy Lee Grahn) will take herself off Kiki’s (Haley Erin) case and leave her in a bit of a bind. GH viewers know Alexis wants to help, but she just won’t think she can win. She may urge Kiki to throw in the towel, but General Hospital spoilers say the fierce med student won’t give up.

It looks like Ava (Maura West) may help Kiki find a new lawyer. Scott (Kin Shriner) will get an offer he can’t refuse this week, so he might be the one she turns to. Over with Maxie (Kirsten Storms), she’ll get some fantastic news. Perhaps little James (Sally Brown) will get a clean bill of health and be cleared to go home.

Other General Hospital spoilers say Valentin (James Patrick Stuart) will keep working on Nina (Michelle Stafford). He’ll make increasingly bold moves to win her over, but she won’t appreciate any of them! Nevertheless, Valentin will do his best to keep fighting for love.

Back with Jason, he’ll get positive updates from Spinelli (Bradford Anderson). Jason will hope that they’re inching closer to their goal. They have to prove Nelle’s (Chloe Lanier) a liar and establish a pattern of behavior. Sam (Kelly Monaco) will manage to pitch in somehow, so “JaSam” fans won’t want to miss that.

Michael (Chad Duell) will also concentrate on destroying his “baby mama.” He’ll set a trap for Nelle on this week’s new GH episodes, June 25-29, so this is the perfect opportunity to drag Chase (Josh Swickard) into it. Chase clearly wants Nelle to go down just as much as Michael does. He’ll cave in on something soon, which could mean he signs on to play the game.