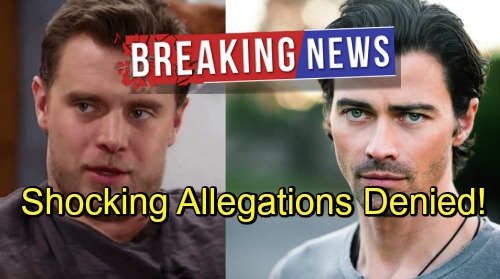 General Hospital spoilers say that GH star Matt Cohen is defending his good name against what appear to be outlandish claims against him and Billy Miller. Matt, who plays former priest Griffin Munro on the hit ABC soap, is firing back at a social media post by a person who claims that he along with his co-star Billy Miller allegedly took advantage of her.

A person by the name of Monique Walls on Twitter suggested that Matt and Billy behaved inappropriately behind the scenes at General Hospital. While there is not much known about this person, on her social media account she implies that she works at Prospect Studios, which is where General Hospital is filmed.

She wrote, “I’m really in tears right now. 2 actors @mattcohen4real and #BillyMiller from @GeneralHospital drugged me a few nights ago. They took advantage of me because I wasn’t in my right mind and it’s not good to do that. I have a restraining order on them now and I’m ok.”

Of course there is no evidence that even one word of that outrageous accusatory Tweet is true. It didn’t take very long for Matt to fire back and reassure his fans that he and Billy had nothing to do with the claims that Monique had made.

He wrote on his official Twitter account, “Thank you to all that support me. No need to engage with this sick person anymore. All the information that is necessary is in the hands of the right people to bring justice. Thank you all, now let’s keep my @twitter feed full of joy and love!!! #you.”

So far General Hospital producers have made no comments about the issue. In the meantime, don’t forget to check back with CDL for all the latest news, updates and spoilers on General Hospital and all of your favorite daytime television shows right here.