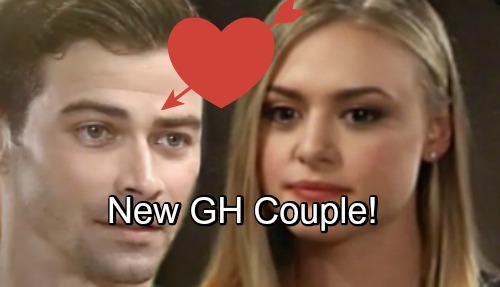 General Hospital (GH) spoilers tease that Dr. Griffin Munro (Matt Cohen) and Kiki Jerome (Hayley Erin) could come together as they cope with pain. Griffin desperately wishes he could undo the mistake he made with Kiki, but Ava Jerome (Maura West) has no intention of forgiving him. Now that Griffin has been suspended from GH, he’ll battle even more heartache. Griffin will feel like he’s lost everything.

As for Kiki, she’s not really even remorseful anymore. Ava nearly cost Kiki a win at the sexual harassment trial, so she obviously doesn’t care that much about her daughter. Since Ava was willing to give Dr. Bensch (James DePaiva) the advantage, that showed Kiki her mom’s true colors. Things turned out in Kiki’s favor, but that doesn’t change how far Ava was willing to go.

Kiki and Griffin are both single now. They already have a strong bond to build on, so they’ve got that going for them. Griffin may start to realize he has no chance of a reunion with Ava. If she keeps up her vengeance plan as promised, Griffin probably won’t even want to get back together. Ava should show him just how vindictive she can be. These General Hospital characters have never been a good match.

Kiki, on the other hand, might be perfect for Griffin. They both have flaws and slip up sometimes, but their hearts are generally in the right place. Plus, they must be attracted to each other or they wouldn’t have had sex. Since a “GrAva” reunion’s probably out and Kiki doesn’t care if Ava’s mad, they might as well just let this happen.

Of course, Kiki’s anger should mix with sorrow eventually. She’s losing her mother, so that’s bound to be tough. Ava also banned Kiki from seeing Avery (Ava and Grace Scarola), so that’s another blow to deal with. Sonny Corinthos (Maurice Benard) will let Kiki see her little sister, but she’ll still have less access. Kiki may feel like her family’s falling apart, which could push her into Griffin’s arms for comfort.

People often connect over misery and rejection, especially on soaps where betrayals are so common. This seems like a great setup for a rebound romance! Ava pointed out that Griffin is drawn to damsels in distress, so needy Kiki may be the ideal woman for him in the coming weeks.

As Ava targets both Kiki and Griffin, it could prompt some bold moves. Griffin may stay in protector mode and take a stand against Ava. It sounds like Kiki could become his focus once Ava’s plot gets out of hand. Naturally, Kiki may return the favor by showing Griffin all the love she has to give.

Kiki didn’t plan on getting back at Ava for sleeping with Morgan Corinthos (Bryan Craig), but she’s getting a dose of revenge anyway. Karma came for Ava and may continue to do so. She might have to watch as Kiki officially steals her man! Griffin and Kiki could evolve into one of the few stable couples in Port Charles.