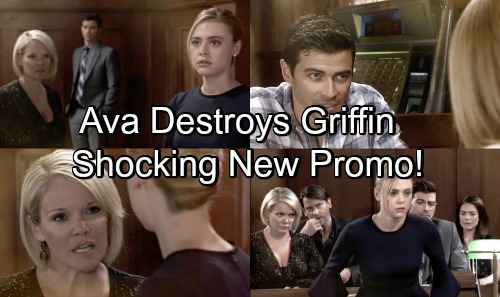 General Hospital (GH) spoilers tease that some courtroom chaos is on the way as fans can see in the shocking new GH promo video below. After Scott (Kin Shriner) blabs about Kiki (Hayley Erin) and Griffin’s (Matt Cohen) hookup, he’ll trust Franco (Roger Howarth) to pass the news along. Scott will insist that Alexis (Nancy Lee Grahn) needs to know about this. It’s the best plan to ensure that she doesn’t ask any risky questions.

Franco will attempt to spill the shocker in time. However, he’ll somehow end up making things worse. Perhaps the wrong message will be relayed, which could set up quite a disaster. Franco’s move may lead to Alexis asking something that prompts a horrifying response.

General Hospital spoilers say Griffin will be nervous as he takes the stand. He won’t know anything about the drama between Scott and Franco. Griffin will just be uneasy over the secret he’s keeping. Nevertheless, he’ll try to remain calm and keep that tidbit to himself. He’ll have no reason to think his sex session with Kiki will come up.

Alas, Griffin can’t escape the consequences of his actions. General Hospital spoilers tease there’s a good chance Griffin will be put on the spot and ultimately blurt out that he indeed slept with Kiki. Griffin isn’t the kind of guy who likes to lie anyway, but lying on the stand would just be too much for him.

General Hospital spoilers hint that the fallout will be brutal! Kiki’s credibility will be damaged, so she may lose her fight against Dr. Bensch (James DePaiva). Regardless, both Kiki and Griffin will face Ava’s (Maura West) wrath. GH fans can definitely expect a fierce revenge mission.

Losing the case would be hard on Kiki, so Ava might take that into consideration. As for the rest of Kiki’s punishment, Ava could cut her daughter out of her life. She may give Kiki the cold shoulder and focus on bringing Griffin down.

General Hospital fans can’t forget that Griffin had an illegal paternity test done. He had to know the truth about Peter’s (Wes Ramsey) connection to Faison (Anders Hove).

Ava’s in the loop, so she could easily expose that bombshell and derail Griffin’s career. Between the scandal with Kiki and his DNA test blunder, Griffin could be fired from GH!

Is that how Ava will get vengeance? Will Griffin’s mistakes finally catch up with him? We’ll give you updates as other details emerge. Stay tuned to the ABC soap and don’t forget to check CDL often for the latest General Hospital spoilers, updates and news.