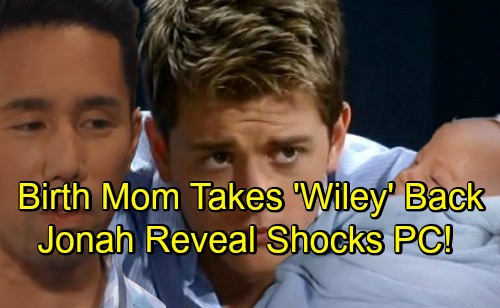 General Hospital (GH) spoilers tease that Brad’s (Parry Shen) lies could cost him big time. When Wiley died, it tore Brad apart and filled him with dread. He couldn’t bear the thought of telling Lucas (Ryan Carnes) that their baby didn’t survive. It would’ve been a terrible blow, especially since they’ve been waiting so long to be parents.

However, swapping dead Wiley for live Jonah was bad idea. Brad spared Lucas that initial pain, but what about the heartbreak that’ll come later? GH fans know this secret is destined to explode, so Lucas will face a far worse loss.

It would’ve been tough to lose Wiley, but at least Lucas hadn’t bonded with the kid yet. Now he’s falling in love with Michael’s (Chad Duell) child, so that’s going to be a problem.

There are several ways for the truth to come out. Brad nearly blurted everything out to Michael in the police station, so he’s clearly not in a good place. His guilt will be tough to cope with in the coming weeks.

Of course, Julian (William deVry) also poses a major risk. He’s been taking pictures galore, so it’s just a matter of time until he compares them and notices something’s off.

Even if both Brad and Julian keep their mouths shut, the biggest obstacle of all is looming. General Hospital has been playing up Lucas and Brad’s birth mom fears. She can take her son back anytime within the first month, so that threat will certainly hang over Brad’s head. You can bet the birth mother will demand her baby before the 30 days are up.

That’ll leave Brad with quite a predicament. He’ll realize he’s going to lose this kid no matter what, so he may be tempted to come clean. After all, this isn’t the birth mom’s child anymore. This is Jonah, who deserves to be raised by Michael.

At the same time, confessing could bring major consequences. Brad would face Lucas’ wrath as well as potential charges. This would probably close the door on an adoption opportunity forever. Brad may choose to keep quiet and hope this somehow works out.

There’s a chance the birth mom will be unable to connect with the baby. She may sense that it’s not hers on some level and hand it back over to “Brucas.” Perhaps she’ll decide that the kid is theirs now and declare that she was wrong. That’d buy Brad a bit more time, but it can’t stop the switch shocker. Sooner or later, Brad will have to pay the price for his actions.

The birth mom might even follow up on her hunch and have a DNA test done. If her mother’s intuition is strong enough, anything’s possible! Regardless, General Hospital spoilers say even more baby drama’s brewing.