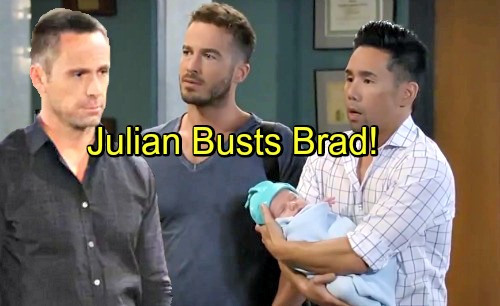 General Hospital (GH) spoilers tease that Brad Cooper (Parry Shen) will remain on edge over the baby swap. He let Nelle Benson (Chloe Lanier) talk him into trading his dead son Wiley for her live one. Brad will hope to keep the switch under wraps, but that’s downright impossible on GH. This shocker is bound to be exposed down the road.

However, any soapy secret tends to trickle out a bit. At least one person tends to be in the loop before the big reveal. In this case, that person just might be Grandpa Julian Jerome (William deVry)! General Hospital spoilers hint that Julian could be faced with a startling dilemma.

It’s true that newborns tend to look similar when they’re this young, but GH went out of their way to cast little ones with noticeable differences. Wiley was smaller and had a much paler complexion than Jonah. His face had tiny features while Jonah’s are more rounded. We should also point out that Julian has pictures of the real Wiley, so that could come into play here.

Brad will do his best to avoid Julian as well as Alexis (Nancy Lee Grahn). They were both on hand to witness Brad’s first meeting with Wiley. Unfortunately, Port Charles isn’t that large. GH characters tend to run into each other constantly, so it won’t be long until Julian sees “Wiley” again.

Of course, Brad will keep wrestling with his conscience until then. Lucas Jones (Ryan Carnes) can tell that something’s up, but he assumes this is about the birth mom. Brad suggested that he wanted to spend as much time with “Wiley” before he was taken away.

Alas, threats are swirling from every angle. If the birth mother wants the baby back, Brad might have to come clean. If she doesn’t, Michael Corinthos (Chad Duell) could still learn the truth somehow and demand his child. The pressure of all this will really take a toll on Brad and his family.

Maybe Julian will be the first snag that comes along. Will Brad and “Wiley” inadvertently run into him? If Gramps wants to sneak another peek at the kid, he may be surprised by what he sees. Julian is no baby expert, but he might notice that “Wiley” has changed a lot since he last saw him. If this encounter happens within the next few new GH episodes, growth can’t really be used as a reasonable excuse.

Brad was a mess when Jordan Ashford (Vinessa Antoine) called him in for questioning. When Lucas asked some questions of his own, it nearly drove Brad to his breaking point. If Julian gets too curious, Brad could easily crack under pressure. He’s feeling awfully guilty, so he may use the opportunity to unburden himself.

General Hospital spoilers say Julian will get bad news soon. Brad might spill the whole heartbreaking story and leave Julian with a decision to make. Since Julian wouldn’t want to devastate Lucas, he might tell Brad to calm down and keep his mouth shut. This is their chance to have a family, so he won’t want them to blow it.

It sounds like some bombshells are brewing in PC. We’ll give you updates as other GH details emerge. Stay tuned to the ABC soap and don’t forget to check CDL often for the latest General Hospital spoilers, updates and news.