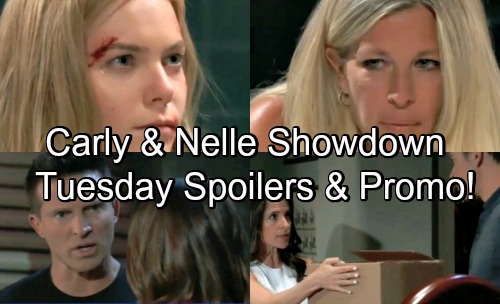 General Hospital (GH) spoilers for Tuesday, August 7, tease that Scott (Kin Shriner) will make a suggestion to Dr. Bensch (James DePaiva). He’ll try to convince his client that settling would be in his best interest. Scott knows about Kiki (Hayley Erin) and Griffin’s (Matt Cohen) hookup, so he’s concerned about the truth getting out. That’s the kind of shocker that could really explode in the courtroom!

Unfortunately, Dr. Bensch won’t be willing to back down. He’ll insist that Scott’s going to fight for him or else he’ll find another attorney. As a result, Scott will promise to do everything he can to win this case. It’ll be a lie, but at least Scott will keep Ava’s (Maura West) scheme intact for now.

Speaking of Ava, she’ll have a warm conversation with Griffin on Tuesday. At GH, they’ll discuss the case and the toll this is taking on Kiki. Ava will just want everything to work out for her daughter. General Hospital spoilers say Griffin will be moved by Ava’s deep concern. He’ll continue to see the good in her, so he’ll tell her that he loves her.

Ava will feel like things are finally falling into place in their relationship, but Griffin’s secret should derail this soon. In the meantime, Alexis (Nancy Lee Grahn) will go over some final court prep with Kiki. She’ll once again push her client to spill absolutely everything. Alexis will continue to feel like Kiki’s holding back, but she won’t pry any other major revelations out of her. That surprise has to come later!

Other General Hospital spoilers say Michael (Chad Duell) will reel over his discovery. He just saw the blanket Julian (William deVry) put in the nursery, so he won’t understand how it suddenly appeared. Sam (Kelly Monaco) won’t think there’s time to ponder the mystery. She’ll place the blanket in a box and tell Michael to head over to the police station right away.

On the pier, Jason (Steve Burton) will encourage Margaux (Elizabeth Hendrickson) to do what’s right. Thanks to that forged consent form, he’ll hope Margaux’s willing to drop all the charges. At the PCPD, Sonny (Maurice Benard) will once again threaten to go public with his newfound knowledge. The press will have a field day unless Jordan (Vinessa Antoine) decides to cooperate.

Luckily, the blanket should seal the deal on Carly’s freedom. It backs up Carly’s story and makes Nelle look like a liar – as if she didn’t look like one already! In the interrogation room, Carly will declare that Nelle messed with the wrong family. She’ll make it clear that the Corinthos clan always comes out on top eventually.

Nelle will take some last-minute jabs as she officially goes down. She’ll taunt the people she’s targeted and perhaps suggest that her presence will linger. Due to the baby swap, Nelle’s definitely leaving some chaos behind!