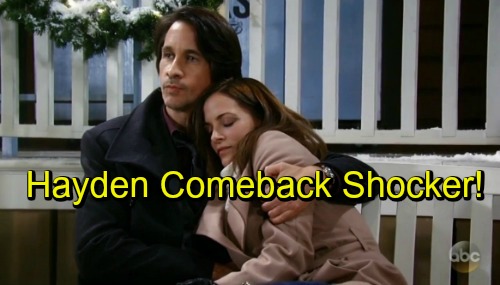 General Hospital (GH) spoilers tease that Finn (Michael Easton) will try to concentrate on the task at hand. He clearly isn’t happy about handling his father’s case. Finn certainly cares on some level, but there’s still plenty of tension between them. Gregory’s (James Read) really making an effort to achieve peace, but Finn would rather just do his job and be done with it.

During a recent chat, Finn suggested that his dad’s condition probably isn’t life-threatening. He didn’t see any major red flags, but they’re still waiting on a few tests. However, GH may be trying to lull fans and this family into a false sense of security. That way it’ll be surprising if Gregory’s condition is truly serious.

On October 10, General Hospital spoilers say Finn will get some shocking news. Perhaps the test results won’t be what he was expecting. The show has to keep this story going, so it makes sense that Finn would have more work to do. It also lines up with earlier GH spoilers. Some fall preview info indicated that Chase (Josh Swickard) and Finn would bond over their father’s difficult ordeal.

General Hospital spoilers state that some buried secrets will be revealed soon. Finn and Gregory will have a chance to hash things out, so maybe they’ll make peace in the nick of time. There’s no need for Gregory to stick around indefinitely. GH may kill him off and give the brothers some good drama. This could be what breaks the final barrier for Finn and Chase. They could form a real connection.

Still, losing his father would be tough for Finn. He’d undoubtedly blame himself for not being able to save Gregory. On soaps, losses and gains tend to balance out. After a blow like this, something good could be headed Finn’s way – or at least something less morbid.

Could General Hospital finally bring Hayden (Rebecca Budig) back in the picture? A quick look at Budig’s IMDB page shows she’s not super busy. Her schedule may be wide open for a GH comeback. All they have to do is set it in motion. Isn’t it about time for Finn to meet his child?

That’d spark some issues for Anna (Finola Hughes) and Finn as well. Would Hayden want a reunion? It’d be great if Hayden showed up as a surprise guest for Liz (Rebecca Herbst) and Franco’s (Roger Howarth) wedding. Later, she could reveal her son or daughter to Finn and wonder if they could still be a family.

Would you like to see Hayden return to GH? We’ll give you updates as other details emerge. Stay tuned to the ABC soap and don’t forget to check CDL often for the latest General Hospital spoilers, updates and news.