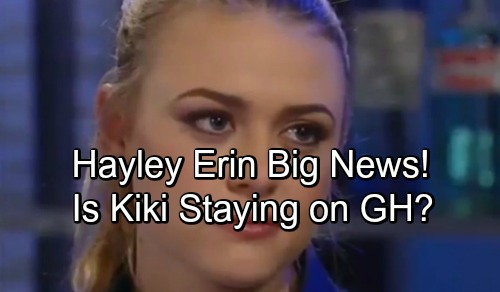 General Hospital (GH) spoilers reveal that some big news has been confirmed. You may have heard about Haley Erin’s (Kiki Jerome) new Freeform pilot. The Perfectionists is a spinoff of the popular Pretty Little Liars, so the show was expected to move forward.

Nevertheless, it’s good to have confirmation this time of year. There’s always a sea of renewals, cancellations and picked-up pilot updates. Sometimes it’s easy to get lost in the maze of TV info, so we’ll clear things up for you. Freeform has indeed ordered The Perfectionists as a new series for 2019.

After the news broke, Erin retweeted a promo for the show and sent out her own tweet to convey her excitement. “It’s official!! Can’t wait for this adventure with all of you,” Erin said. This is certainly a fantastic opportunity for her. A couple of soap stars even congratulated Erin on her primetime break.

Everyone wishes Erin the best of luck on her latest project, but what does this mean for her General Hospital future? Erin has promised that she wants to do both shows if she can. There actually are some new details that make this arrangement seem possible.

According to Hollywood Reporter, this is a 10-episode series order. Since there’s a large cast, splitting time between sets could be feasible for Erin. She doesn’t appear to have any significant clips in the pilot preview, so her role may not be all that substantial.

It’s also worth noting that the first Pretty Little Liars spinoff, Ravenswood, was canceled after one season. How will The Perfectionists fare for Freeform? Regardless, it might be wise for GH and Erin to make this work. If this new series doesn’t pan out, Erin would still have a home as Kiki in Port Charles.

It’s official!! Can’t wait for this adventure with all of you♥️ https://t.co/CHo0Ra4WYU

From Rosewood to Beacon Heights, life is anything but perfect. Here’s your first look at our new spinoff series, @PLLTVSeries: The Perfectionists, coming to Freeform in 2019. More info: https://t.co/qJk1gCoWIv. #PLLThePerfectionists pic.twitter.com/EC3fxn7CDL