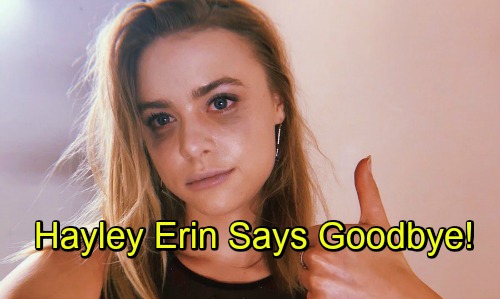 General Hospital (GH) spoilers reveal that a departing ABC soap star is speaking out. GH showed the heartbreaking discovery of Kiki’s (Hayley Erin) dead body, so Erin decided to address her exit. She wanted to let General Hospital viewers know how much her run meant to her.

“RIP Keeks,” Erin said. “Much love to my @GeneralHospital family, I’ll miss you guys. Thank you for this wonderful, wild ride in daytime. I’ll always be grateful to the fans who embraced Kiki through the years, my life wouldn’t be nearly this beautiful without your constant love and support XO.”

Unless you’ve been living under a rock, you probably suspected Kiki was going to bite the dust at some point. It’s been the talk of the soap world for months. General Hospital also delivered plenty of clues to suggest that Kiki’s demise was looming.

However, it’s been shocking to see just the same. You can know all about a gruesome death, but still feel taken aback when the horror actually unfolds. That’s undoubtedly how many GH watchers are feeling right now. It’s tough to believe Kiki’s really gone!

On the bright side, that helps us connect with all the grieving characters. Griffin’s already in mourning and others will join him soon enough. Ava (Maura West), Julian (William deVry), Carly (Laura Wright) and Sonny (Maurice Benard) will all hear the devastating news on Thursday. It won’t be long until Franco (Roger Howarth), Liz (Rebecca Herbst) and Michael (Chad Duell) get updates, too.

General Hospital spoilers say there’ll be plenty of sorrow, but it’ll mostly be masked by rage. When someone dies so horrifically, it’s easy to push that pain down and focus on the vengeful side of things. That’ll be how some of Kiki’s loved ones choose to handle overwhelming despair.

As for Erin, don’t fret about her career! This actress has a brand-new role on Freeform’s Pretty Little Liars spinoff. Erin’s been hard at work on the set of The Perfectionists, which is what led to this tough GH exit. Fans can look forward to seeing this primetime drama and any other projects Erin takes on.

How do you feel about Hayley Erin’s departure? Will you miss having Kiki in Port Charles? We’ll keep you posted as other GH details emerge. Stay tuned to the ABC soap and don’t forget to check CDL often for the latest General Hospital spoilers, updates and news.