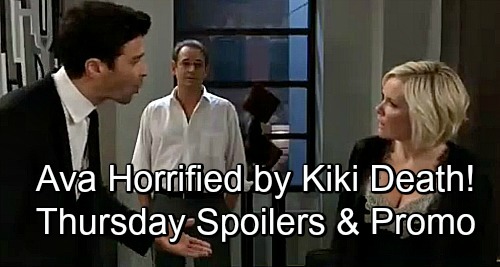 General Hospital (GH) spoilers for Thursday, November 29, tease that Julian (William deVry) will get some crushing news. He’ll hear about Kiki’s (Hayley Erin) murder and promptly fill in Alexis (Nancy Lee Grahn). Julian will declare that his niece was stabbed to death, so Alexis will offer comfort. She’ll just want to be there for Julian as he deals with this devastating blow to his family.

Over with Maxie (Kirsten Storms), she’ll put on a brave face. Maxie will promise Peter (Wes Ramsey) that she’s OK, but he won’t know it he buys it. Peter won’t want to be pushy, but he’ll feel the need to support Maxie. He’ll wonder if she’s sure she wants to be alone right now. Kiki’s death has left everyone rattled, so Maxie may admit she’d like some company.

Meanwhile, Jordan (Briana Nicole Henry) will discuss some new evidence with Curtis (Donnell Turner). Chase (Josh Swickard) stumbled across something in Griffin’s (Matt Cohen) apartment that could be crucial to the case. Of course, it’s undoubtedly proof that was planted by Ryan (Jon Lindstrom). This should add to the suspicions swirling around grieving Griffin, so GH fans can expect some trouble.

For now, Griffin will have to give Ava (Maura West) some harsh updates. He’ll be incredibly upset as Ava tries to get rid of him at her penthouse. Griffin will finally shout that something horrible has happened. Ryan will be on hand for Griffin’s grim announcement. He’ll tell Ava that Kiki is dead, so that bombshell should hit her hard.

Other General Hospital spoilers say Carly (Laura Wright) will be in shock as well. It looks like she’ll get a message about Kiki’s demise. The thought of Avery’s (Ava and Grace Scarola) big sister being murdered will leave Carly confused and distraught. Carly will suggest that it doesn’t make any sense as Sonny (Maurice Benard) pushes for answers. He’ll be equally disturbed when he learns Kiki’s gone.

At GH, Anna (Finola Hughes) will stick to the plan. With Finn (Michael Easton) by her side, Anna will assure Britt (Kelly Thiebaud) that her mother will be brought to justice. They’ll move forward with the next phase of the plot, but it could hit a snag soon enough.

General Hospital spoilers say Liesl Obrecht (Kathleen Gati) will catch on fast. Over the phone, she’ll guess exactly what Britt’s up to. Liesl will ask if she’s colluding with Anna on a trap, so Britt may have a hard time selling Anna’s story.

It sounds like another action-packed episode’s on the way. We’ll keep you posted as other GH details emerge. Stay tuned to the ABC soap and don’t forget to check CDL often for the latest General Hospital spoilers, updates and news.