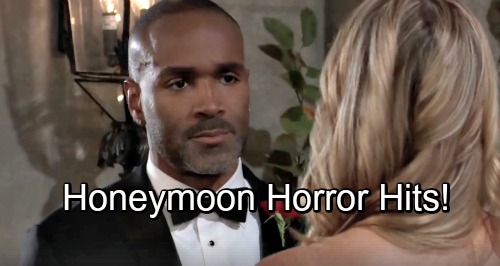 General Hospital (GH) spoilers tease that Curtis (Donnell Turner) and Jordan (Briana Nicole Henry) have a wonderful wedding ahead of them. Naturally, there’ll be a couple obstacles as they prepare to tie the knot. They’ll be minor in the grand scheme of things, but Maxie (Kirsten Storms) and Lulu (Emme Rylan) will still find themselves in panic mode.

It turns out there’ll be some confusion over some special gifts for the nuptials. Everybody knows a bride needs something old, something new, something borrowed and something blue. Jordan’s gang of gals will have it covered for the most part. Anna (Finola Hughes) and Molly (Haley Pullos) will have two “somethings” handled. They’ll provide the blue and borrowed, so Jordan will just need new and old.

Unfortunately, that’s where the mini crisis will come in. General Hospital spoilers say Lulu and Maxie will get a bit mixed up. They’ll both think they’re supposed to supply the new portion of this fun tradition. Maxie and Lulu won’t want to curse Jordan with bad luck, but she’ll insist everything’s going to be fine. Jordan won’t want them to sweat it since she has total confidence in this marriage.

GH fans can expect Jordan to proceed without something old, but that’ll actually come into play later. Someone surprising will provide the last “something” on the list. It certainly sounds like Stella (Vernee Watson) will appear with a peace offering. Perhaps she’ll give Jordan a present that’s been handed down and show her that she’s willing to put their issues aside.

General Hospital spoilers say Jordan and Curtis will ultimately get married. There’ll be no crazy crashers or objections to derail their big day. Curtis and Jordan will simply kick off the rest of their lives together. Alas, a pleasant honeymoon just isn’t in the cards right now. A disturbing shocker’s about to hit Port Charles and it’ll really throw the police commissioner for a loop.

Is another murder about to go down? Will Ryan (Jon Lindstrom) claim his next victim? It seems too early for Kiki’s (Hayley Erin) potential demise based on General Hospital spoilers. Of course, we could see a day player bite the dust. Some nurse at GH might stumble across “Kevin’s” dirty little secret and get killed over it.

Then again, this could involve some non-lethal action of Ryan’s. He might leave some blatant, horrific clue as a way to taunt the PCPD. Regardless, Jordan and Curtis won’t be taking that trip to Fiji anytime soon! We’ll give you updates as other GH news comes in. Stay tuned to the ABC soap and don’t forget to check CDL often for the latest General Hospital spoilers, updates and news.