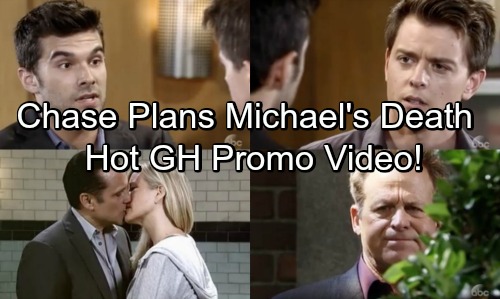 General Hospital (GH) spoilers tease that more drama’s brewing in Port Charles. A new GH promo features a glimpse at some shocking storylines. For starters, Kiki (Haley Erin) and Griffin (Matt Cohen) will be in a bind. Dr. Bensch (James DePaiva) still has a pic of them and it looks awfully suspicious. He’ll give it to Scott (Kin Shriner) and expect it to be their golden ticket to beating this lawsuit.

Since Scott’s secretly working with Ava (Maura West) and Franco (Roger Howarth), he’ll know things could get ugly. After Franco gets updates, he’ll be tasked with filling in Alexis (Nancy Lee Grahn). She’ll have concerns, but Kiki will insist that the pic proves nothing. A warm embrace is common between pals.

General Hospital spoilers say Kiki will deny any romantic or sexual involvement with Griffin. She’ll promise she isn’t holding back, but that’s not true. GH fans can’t forget about Griffin and Kiki’s hookup after the Nurses Ball. That was certainly a night they’ll remember forever and not for the right reasons!

Once Griffin’s brought up to speed, he’ll push Kiki to come clean. Griffin will think they need to tell Ava that they slept together, but Kiki will wonder if he’s lost his mind. She won’t want to devastate Ava and provoke the worst fury they’ve ever seen.

Unfortunately, they won’t know Scott’s eavesdropping nearby. General Hospital spoilers say Scott will consider blabbing to Ava, but will he actually do it? He may not want to be the bearer of bad news! Having this bombshell leak in court seems more likely at this point.
Of course, we should also talk about Chase’s (Josh Swickard) sneaky plan. He wants to set a trap Nelle (Chloe Lanier) and ultimately bring her down. It sounds like Chase will prey on Nelle’s penchant for killing fiancés. He’ll insist that Michael (Chad Duell) needs to die, which undoubtedly means a faked death scheme.

Chase may coax Nelle into plotting Michael’s demise with the promise of a sexy future together. This setup could bring some serious risks, but it could also pay off big time. If they can prove she set out to harm Michael, it won’t take much to get Nelle locked up.

Over with Julian (William DeVry), he’ll have his heart set on expanding Charlie’s Pub. Julian will feel like he can handle whatever’s buried within those walls, but he may not be prepared after all. Will the moved body and gun be on site? Sonny (Maurice Benard) will have to put out another fire soon, so anything can happen on the ABC soap!

General Hospital viewers won’t want to miss the chaos ahead. We’ll keep you posted as other details emerge. Stay tuned to GH and don’t forget to check CDL often for the latest General Hospital spoilers, updates and news.