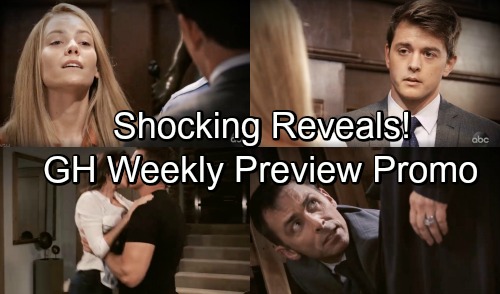 General Hospital’s new promo video teases a week full of enemies, exes, and heat. It’s going to be an exciting week with a major character return, so get ready! First off, Valentin (James Patrick Stuart) will get a big surprise on the pier. He’ll run into his enemy Laura (Genie Francis), who’s back in Port Charles. It’s been a while since these two have had a run-in, and it looks like it will catch Valentin completely off-guard.

The video shows Valentin bending over to pick something up, and Laura’s high-heeled boot will step on Valentin’s hand. Laura will enjoy her moment of superiority over Valentin, as she says “Valentin Cassadine, finally at my feet.” The two will go on to have a tense conversation, and Laura will happily announce that she’s back in Port Charles for good.

Next, the promo shows a major return…Nelle (Chloe Lanier)! Nelle is shown in handcuffs and an orange jumpsuit, and interacting with Michael (Chad Duell), who doesn’t look thrilled to be in her presence. It appears that Nelle will try to pull her charms on Michael, as she tells him that he looks good. Michael curtly responds that “you look appropriate,” referring to Nelle’s prison garb.

It will be interesting to see what else these two talk about in their limited time together. Nelle may take the opportunity to drop another hint about Baby Wiley, like she did in the letter she sent to Michael, when she stated that Michael may take comfort in spending time with Wiley. Chances are, Nelle won’t be able to help herself from stirring up Michael’s pain and causing him more angst.

Finally, let’s turn to the “heat” portion of this week’s promo video. Jason (Steve Burton) and Sam (Kelly Monaco) are shown stirring up some heat as they engage in a major make-out session. These two have been drawn to each other lately, and it doesn’t look like they could stay away from each other if they tried. Serious chemistry.

But despite wanting to be together, the two won’t make love right away, according to GH spoilers. Instead, it looks like they’ll get interrupted by Drew (Billy Miller), who wants some emotional support from Sam about what he’s going through with Oscar (Garren Stitt). But the promo shows another scene between Jason and Sam, with Sam asking Jason to stay. Will they finally get together later in the week? We’ll see.

It looks like we’re in for an exciting week on GH. Be sure to stay tuned for all the drama. We’ll give you updates as other news comes in. Stay tuned to the ABC soap and don’t forget to check CDL often for the latest General Hospital spoilers, updates, and news.