General Hospital Spoilers: Is Ava Pregnant With Ryan’s Baby – Could History Repeat Itself? 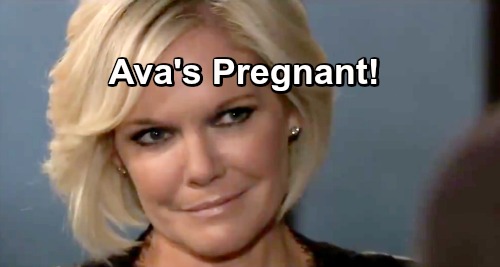 General Hospital spoilers tease that history could repeat itself with Ava Jerome’s (Maura West) recent romantic activities General Hospital viewers have recognized that Ava’s not quite on her game lately. Usually Ava is very careful not to leave evidence that could tie her to any crime scene.

GH fans notice that recently Ava left her fingerprints and possibly her DNA as well all over Sasha Gilmore’s (Sofia Mattsson) hotel suite when she set up Sasha and Griffin Munro (Matt Cohen) to look like they’d had a drunken night of passion.

Could Ava’s recent carelessness extend to her love life and birth control usage? Could the bereft mother come up pregnant with Ryan Chamberlain’s (Jon Lindstrom) baby? Viewers will recall she wasn’t particularly careful on the night she had crypt sex with Sonny Corinthos (Maurice Benard) either – and that misguided passion resulted in Avery (Ava and Grace Scarola).

Having conceived another child on the night of her daughter Kiki Jerome’s (Hayley Erin) murder, and with the murderer as the father, would be the supreme ironic justice that could be ahead for Ava. Of course, a new baby actually could be quite healing for Ava – perhaps she would feel like she’d do it right this time, and not make the mistakes she made with Kiki, and even Avery.

But when Ryan is exposed as the new serial killer —as he no doubt will be in time a terrible shocker is in store for Ava. As Kiki’s  (Hayley Erin) murderer, as well as the father of her new baby- Ava would face a world of possible conflict. She will know her baby is innocent – but the child might remind Ava of Kiki’s death at the hands of the new baby’s father. Would she go through with the pregnancy?

One thing General Hospital viewers probably won’t have to fear is Ryan being a danger to the baby, especially not if he’s the father! Long time GH fans will recall when Ryan first came to Port Charles over twenty years ago he was actually a pediatrician. At one point he kidnapped Georgie Jones (Alana and Marina Norwood, Ryan and Caitlyn Cohen) as a baby, and she was safely rescued… but Ryan got so attached to her he renamed her “Celeste!”

Ava having a pregnancy with Ryan’s child could really create some dramatic and soapy situations, not to mention a demon spawn if he or she inherits the parental criminal genes. Stay tuned to GH and keep checking General Hospital spoilers frequently to see if the writers have Ava go down this road again!