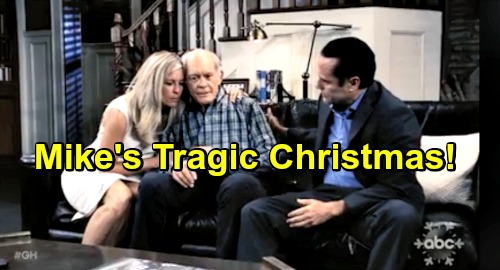 General Hospital’s new promo video teases that the holidays will be challenging for one Port Charles family. The Corinthos family was rocked when they learned from Dr. Munroe (Matt Cohen) that Mike (Max Gail) has Alzheimer’s Disease. And this week’s video promo shows the family struggling over the Christmas holiday to deal with the brutal realities of the disease.

The family knows that its future with Mike is uncertain, and that this is likely the last Christmas that Mike will remember the rest of his family. But they are all facing it together with courage and compassion.

They’ll spend the holidays together as a family, enjoying their time with Mike as best they can. Of course, it’s difficult when Mike floats in and out of moments of clarity. But they’ll all do the best they can to make the holiday a special one.

Still, it will be tough since there is currently some serious drama at Mike’s day program. He’s become close to another Alzheimer’s patient, Yvonne (Janet Hubert), who happens to be married but generally doesn’t remember her husband, Marcus (Nigel Gibbs). Marcus wants Mike to stay away from Yvonne, and it’s got Mike confused.

Of course, Sonny (Maurice Benard) is being hit hard by watching his father struggle. “He’s slipping away,” Sonny states in the promo. “The good times are getting less.” Sonny is shown at church, lighting a candle for his father and praying. Sonny wishes he could make the whole situation better, but this is one thing that the most powerful man in Port Charles has no control over.

But it looks like the Corinthos clan will come together for Mike and make some holiday memories that will endure, to give them comfort when Mike eventually deteriorates to the point of needing around-the-clock care. But for now, they’ll enjoy the time they have as a family, even though it will be bittersweet.

It sounds like we’re in for some touching family scenes this holiday season. We’ll give you updates as other news comes in. Stay tuned to the ABC soap and don’t forget to check CDL often for the latest General Hospital spoilers, updates, and news.