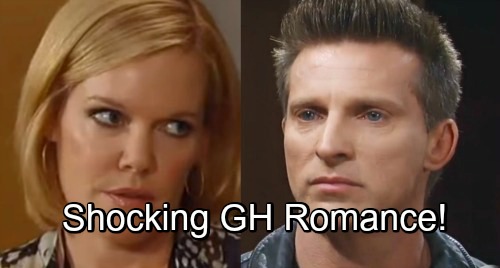 Of course, viewers immediately started weighing in on “Java” and their chemistry. Some General Hospital watchers naturally weren’t feeling it, but others saw some real potential. There’s a chance that this dream served as a bit of a chem test. After all, putting Jason and Ava together would bring a goldmine of drama!

Back when Jason was held in that Russian clinic, Ava was instrumental in saving him. Without her help, Jason probably never would’ve made it back to Port Charles. Their friendship was lovely and seemed like it could develop into something more – until Jason learned about Morgan’s (Bryan Craig) pill swap.

However, no obstacle is insurmountable on a soap. If General Hospital ever wants to put Jason with Ava, they’ll do it. They won’t let Ava’s actions stand in their way. This could actually be a good forbidden romance. Even if it’s just a one-time mistake, can you imagine Carly’s (Laura Wright) fury? She thinks her bestie is the greatest thing on the planet, so it’d be nice to see some friction for once.

After all, GH is certainly taking their time on Jason and Sam’s (Kelly Monaco) reunion. What’s the holdup? Sam and Jason want each other, so what’s the problem? It seems like there may be some behind-the-scenes issues here. If that’s the case, this may all be a big tease. General Hospital spoilers hint that “JaSam” will take steps in the right direction this month, but a huge snag is on the horizon.

Meanwhile, Ava’s most likely falling for Ryan (Jon Lindstrom) the serial killer. That’s clearly not going to work out. General Hospital buzz suggests that Ryan may kill Kiki (Hayley Erin), so where will Ava turn for comfort? If Jason ends up brokenhearted as well, could he seek relief with Ava? With enough alcohol and pain between them, anything’s possible!

What did you think of Ava and Jason’s chemistry on Monday? Are they hot or not? Would you like to see GH explore a “Java” romance or at least a hookup? We’ll give you updates as other news comes in. Stay tuned to the ABC soap and don’t forget to check CDL often for the latest General Hospital spoilers, updates and news.