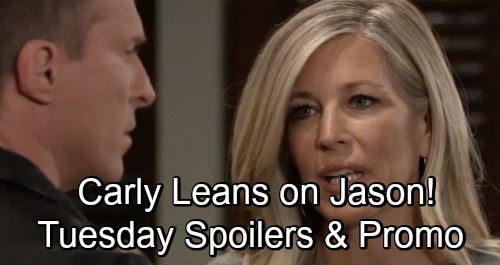 General Hospital (GH) spoilers for Tuesday, November 13, tease that Josslyn (Eden McCoy) and Cameron’s (William Lipton) bond will grow stronger. GH fans know Cam’s pretending to be Joss’ boyfriend, but this could turn into the real deal eventually. Cameron’s had feelings for Josslyn for a while now, so she’s the only one who needs to come around.

In Tuesday’s episode, Josslyn will give Cameron a sweet look and talk about what a good time she had. It looks like this ruse could bring more heartache for Oscar (Garren Stitt). Speaking of Oscar, he’ll meet with Alexis (Nancy Lee Grahn) at Charlie’s Pub. Julian (William deVry) will watch and listen in if possible. He’ll hope for a way to help Kim (Tamara Braun) and Oscar get on the same page.

As for Alexis, she’ll want to be certain Oscar knows what he’s doing. Emancipation is a huge step, so she’ll ask if Oscar’s sure he’s ready. General Hospital spoilers say Oscar will stick to his guns for the time being. Over at GH, Kim and Drew (Billy Miller) will discuss their family crisis. They’ll be talking about Oscar’s emancipation lawsuit when Monica (Leslie Charleson) struts in.

Monica will be crushed to hear about Oscar’s plan and all it entails. He needs his parents more than ever, but he’s shutting them out. Furthermore, Monica will be concerned about that clinical trial. If Oscar’s emancipated, Drew and Kim can’t force him into the treatment. This is his last shot at survival, so Monica will hope she can help somehow.

While Jason reassures Carly, Margaux (Elizabeth Hendrickson) will seek answers from Sonny. She’ll awaken and realize Sonny stayed the night with her at Jeanette’s (Ely Pouget) place. Naturally, Margaux will wonder why. There’s been plenty of tension between these two, so Margaux just won’t understand.

Thanks to Sonny’s vivid dream, he’ll continue to soften toward Margaux. Sonny’s got a better grip on the damage violence can do and how it affects a family. He’ll try to make amends with Margaux in some small way.

Elsewhere, Jordan (Briana Nicole Henry) and Curtis (Donnell Turner) will meet for a chat. When Mary Pat’s (Patricia Bethune) murder investigation comes up, Curtis will ask if the cops are still looking at Carly. Jordan may suggest that she’s on their radar, but they’re leaning toward someone a bit more coldblooded. She seems to get that this is the work of somebody especially cruel and calculating.

Ryan (Jon Lindstrom) will have to be careful as the PCPD keeps digging. However, Curtis and Jordan will ultimately shift gears. They’ll talk about their upcoming wedding, so it won’t be all doom and gloom in Port Charles! We’ll give you updates as other GH news comes in. Stick with the ABC soap and don’t forget to check CDL often for the latest General Hospital spoilers, updates and news.