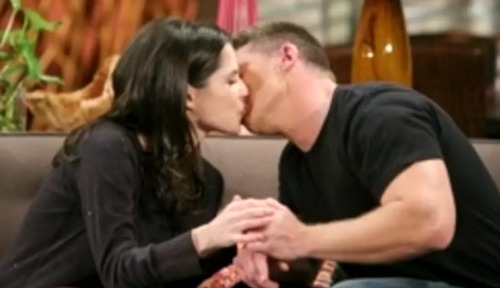 General Hospital (GH) spoilers tease that Jason (Steve Burton) and Sam (Kelly Monaco) will continue to navigate tricky territory. Jason’s clearly ready for a reunion and has been from the day he returned. However, he’s more than willing to respect Sam’s wishes. Jason would love for their relationship to be progressing a little faster, but he’ll take what he can get at this point.

Fortunately, things are moving in the right direction. Jason and Sam have had a couple close calls when it comes to making love. It’s obvious that passion’s burning bright. Sam’s not quite ready to take that leap again, but she’s getting there. General Hospital spoilers say they’ll inch closer to that big moment in the weeks ahead.

November will bring several ways for Jason and Sam to bond. Their connection will indeed strengthen, which is great news. The deeper their feelings, the more likely it becomes that Sam will cave in. Of course, Sonny’s (Maurice Benard) drama will keep them pretty busy this month. Carly’s (Laura Wright) Ferncliff woes will also pull Jason back in her direction.

However, Sam and Jason will manage to carve out time for each other. They won’t let their growing closeness slip through their fingers. GH spoilers say “JaSam” won’t take the biggest step in November, but they’ll still take a significant one. What does that mean exactly? The biggest step might be a full-blown reunion. That could mean couple status again and all that entails.

Since Jason and Sam aren’t going to hit that mark just yet, perhaps a long-awaited sex session is the next best thing. It might not seal the deal on being official, but it could open the door to it. Some steamy scenes would at least please all the “JaSam” fans out there! They’ve been patiently waiting for their favorite duo to hit the sheets, so let’s hope General Hospital delivers.

A surprisingly hot fall’s ahead in Port Charles. Are you excited to see what the future holds for Jason and Sam? We’ll give you updates as other GH details emerge. Stay tuned to the ABC soap and don’t forget to check CDL often for the latest General Hospital spoilers, updates and news.