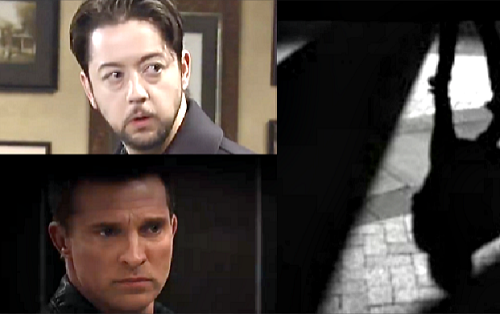 General Hospital (GH) spoilers tease that Damian Spinelli (Bradford Anderson) is ready to head to Europe and get some crucial info. Jason Morgan (Steve Burton) has some reservations about Spinelli’s plan to masquerade as Heinrik Faison (Wes Ramsey), but Spin is certain he can pull this off. He’s hoping to fool the bank into letting him open Cesar Faison’s (Anders Hove) safe deposit box.

In Spinelli’s mind, the benefits outweigh the risks. Jason needs more Heinrik details and Drew Cain (Billy Miller) would like to retrieve his memories. This plot could help get them what they want, but it sounds more like a recipe for disaster!

What if someone who knows Heinrik encounters Spinelli and exposes him as an imposter? It’s surprising that one of the twins hasn’t stepped up for a fake death scheme, but this is the plan Spinelli’s set on. He’s convinced this is their best shot at securing information. Spin will keep his fingers crossed and hope that he makes a believable Heinrik.

Sam Cain (Kelly Monaco) recently said her goodbyes and left Port Charles to sort out her feelings. That’ll free Jason up to follow Spinelli if he lands in a tight spot. GH fans know Jason would never leave his pal in danger. If Spinelli needs him, he’ll do whatever he can to save the day.

Past General Hospital spoilers stir up some interesting suspicions. There have been several hints over the past year or so that Nikolas Cassadine (most recently portrayed by Nick Stabile) may not be as dead as he seems. Nobody would be surprised if GH is prepping for a Nikolas comeback.

When Ava Jerome (Maura West) befriended Jason (aka Patient Six) in the Russian clinic last October, she first thought he might be Nikolas. Valentin Cassadine (James Patrick Stuart) has always argued that there’s no proof of Nikolas’ demise. In fact, many General Hospital viewers have speculated that Valentin helped Nikolas fake his own death.

Other fans question why Nikolas would’ve left Spencer (Nicolas Bechtel) in the dark on this potential charade. Of course, there are ways to explain that. Spencer is a smart little guy, so it’s possible that he knows more than anyone realizes. After all, he knew about Nikolas’ other death sham.

Considering all the mentions of Nikolas since his disappearance and alleged death, what if Spinelli and Jason’s European mission leads to a shocking discovery? Could they happen to stumble across Nikolas and bring him back to Port Charles?

This could go a long way toward redeeming Valentin, which would really benefit him right now. Since Valentin’s partnership with Peter August (Wes Ramsey) will be exposed soon, the fact that he spared Nikolas could help him out a great deal.

Would you like to see Nikolas make a comeback? Do you think Jason and Spinelli’s latest adventure could lead to Nikolas’ return? We’ll give you updates as other GH news comes in. Stick with the ABC soap and don’t forget to check CDL often for the latest General Hospital spoilers, updates and news.