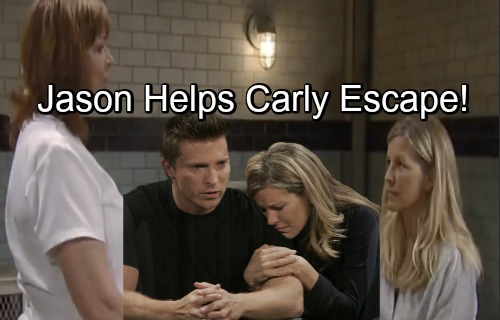 General Hospital (GH) spoilers reveal that Jason (Steve Burton) will move forward with a risky plot. The idea of Carly (Laura Wright) suffering in Ferncliff fills his heart with dread. Jason loves his best friend, so he’s committed to helping her score her freedom. However, it’s becoming clear that it’ll take some time. Jason won’t be able to free Carly immediately, so he’ll need another solution.

In an interview with Soap Opera Digest, one of GH’s co-head writers dished on what’s ahead. Shelly Altman suggested that Jason would be willing to do something drastic. He wants Carly to be reunited with her loved ones, but he’s OK with exploring other options for now. Altman teased, “And Jason realizes that if Carly can’t get out to be with them, he’s got to find a way to be in with her.”

How can Jason make that happen? He could sneak in and pretend to be a patient, but that may not be the best route to take. Jason would be better off acting like a staff member. That way he’d have some control over the situation and could help Carly.

Spinelli (Bradford Anderson) could easily make a fake badge and security pass. It’d be simple to hook Jason up with a uniform, too. But as we know from Wednesday’s GH episode, June 13, Jason will position himself as an inside man. He infiltrates Ferncliff applying for a job as a custodian and sees the horrible conditions a drugged up Carly’s facing. She will suffer mistreatment and prompt Jason to spring her ASAP.

General Hospital spoilers say Carly’s Ferncliff stint will indeed bring excitement. It’d be fun to watch Jason step up to rescue Carly. He could come up with a plot to help her escape! Jason could hide Carly somewhere until he can clear her name. He’d rather stick her at a safe location than let this mental institution take a toll on her.

Do you think Jason will assist with Carly’s getaway? He may have no choice if Carly’s stuck with vicious foes and ruthless staff. Regardless, you can bet that Jason will do whatever it takes to protect her. We’ll give you updates as other General Hospital news comes in. Stay tuned to ABC’s GH and don’t forget to check CDL often for the latest General Hospital spoilers, updates and news.