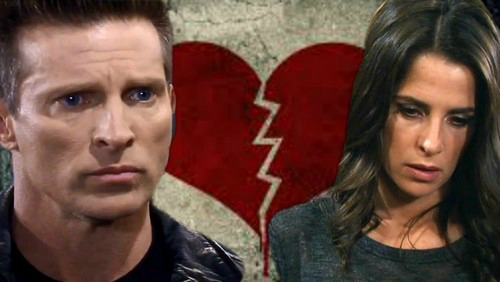 General Hospital (GH) spoilers tease that Jason (Steve Burton) and Sam (Kelly Monaco) will keep dancing around a real romance. They’ve been taking steps in the right direction lately, but are they ever going to take the plunge? There are plenty of “JaSam” fans out there and rightly so. Sam and Jason have loads of chemistry along with a history to back it up.

It’s a no-brainer to go for a reunion, but there’s no guarantee GH will make it happen. Twists and turns are always just around the corner. Jason and Sam clearly have deep feelings for each other, but could something happen to change the game? If Sam can’t make a commitment, Jason may decide to move on eventually.

After all, Jason admitted he’d gotten used to cold showers. He’s clearly itching for some action in the bedroom. It’s been a long time since Jason got busy, especially when you consider all those years he spent in captivity. It didn’t feel that long to Jason since he was drugged up, but it’s still important to note.

Should Jason find a new woman to cozy up to? Although “JaSam” fans wouldn’t be happy, many other General Hospital viewers are eager to see something else. It wouldn’t hurt to pair Jason up with another lovely lady. That’s especially true if Sam’s connection with Drew (Billy Miller) strengthens again. A “Dream” reunion could break Jason’s heart and leave him looking for comfort elsewhere.

If Jason ends up with another love interest, he’s got some options. For starters, there’s Liz (Rebecca Herbst). General Hospital spoilers hint that she may have a rough patch coming up with Franco (Roger Howarth). Between their family issues and Franco’s dark side, there could be real trouble. Liz’s heart might be open to Jason down the road.

Carly (Laura Wright) is Jason’s bestie, but they could head into romantic territory if the story calls for it. It’s doubtful since it’d cause a huge rift between Jason and Sonny (Maurice Benard), but it’s possible since Sonny may end up cheating with Margaux (Elizabeth Hendrickson). We’re seeing signs of a brewing hate-turns-to-attraction affair.

Speaking of Margaux, she might be another option for Jason at some point. Some General Hospital fans have picked up on some chemistry in their scenes together. The same goes for scenes between Jason and Kim (Tamara Braun). Since Jason looks like Drew (Billy Miller) used to look, Kim could certainly be drawn to him. It’s almost surprising GH hasn’t capitalized on that angle already.

General Hospital could also go for an Ava (Maura West) hookup after the Ryan (Jon Lindstrom) drama explodes. Jason and Ava were a couple in Sonny’s fantasy episode, so it’s not like GH hasn’t tested the waters. They could even bring a new woman on canvas for Jason if they can’t settle on any of the others.

What do you think Jason’s romantic future should look like? Which love interest should he be with? We’ll give you updates as other GH news comes in. Stay tuned to the ABC soap and don’t forget to check CDL often for the latest General Hospital spoilers, updates and news.