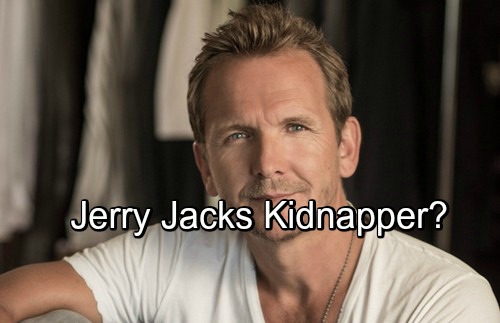 General Hospital spoilers tease that Liesl Obrecht (Kathleen Gati) could have a male accomplice in the kidnapping and captivity of Peter August (Wes Ramsey). In Friday’s (June 1) episode, we saw someone sneak up behind Peter in his hotel room and give him a downward shot of something in his shoulder with a huge syringe.

Later, we see him dragged into a cabin by what appears to be a man in dress trousers and shoes and later upon a bed, tied spread-eagle. There’s already buzz that Liesl and Nina Cassadine (Michelle Stafford) may be co-conspirators in the kidnapping, and while Nina is a tall girl, she couldn’t have dragged Peter into the cabin and up on the bed, and besides, she was visiting with Maxie Jones West (temporarily played by Molly Burnett) and baby James (Sally Brown) at the time.

While Liesl could have supplied the syringe and the substance in it, even if she had dressed as a man and been able to drag Peter out of his hotel room and into the cabin, it’s doubtful she could have lifted Peter up on the bed. All current evidence points to a male accomplice being involved as well. Plus, what happened to the flash drive Peter was obviously going to leave for Drew Cain (Billy Miller)? It doesn’t seem that Liesl would have any use for that!

So who could this male accomplice be? There are theories that Nina recruited Curtis Ashford’s help to carry out the kidnapping of Peter, in collusion with Liesl. While Curtis might be tall enough and strong enough, this doesn’t make sense for several reasons.

Curtis was a police officer at one time, and while he’s had some problems in his past, they don’t involve felonies. He just wouldn’t do it. There are even questions if Nina was involved at all….although she did get a text from someone while she was in Maxie’s hospital room, and seemed to know what it was about. Peter will certainly blame her since she showed up at the cabin!

Liesl certainly could be behind the kidnapping plan as well, since she wants to get revenge for Nathan’s (Ryan Paevey) death, and she blames Anna Devane (Finola Hughes) and Peter—what better revenge than killing Anna’s son, after all? Plus she threatened Anna so that makes her a prime suspect.

Could there be Cassadine involvement? We know it’s not Valentin (James Patrick Stuart), that would just get him in more trouble with Nina, and Peter had locked him up in the jail cell. There’s no reason to believe Victor (Thaao Penghlis) could have come back from the dead and helped with this…besides, he was pretty upset with Liesl for lying to him about being Nathan’s father. He probably wouldn’t want to have anything to do with helping her with anything again. Nikolas (Nick Stabile) is doubtful unless he was under some kind of mind control, and there haven’t been any recent mentions of either of them on GH.

However, in Friday’s episode, Robert (Tristan Rogers) DID mention someone while in a conversation with Anna about some of their daughter Robin’s (Kimberly McCullough) past experience. That person would fit the bill for everything…Jerry Jacks (Sebastian Roche)! While sometimes character mentions do not mean anything in soap opera scripts, sometimes they hint at a character’s return.

Jerry Jacks has been in cahoots with Liesl before..and during Drew’s time of captivity in the clinic when Robin was also kidnapped and presumed dead and held against her will to create a resurrection serum. Having been involved for years with Cesar Faison in the cartel and the DVX, he probably would have known Peter as Heinrik growing up like Valentin did. He may have a laundry list of grievances against both Anna and Peter and be more than happy to help Liesl exact revenge.

So will GH viewers see the mysterious kidnapper or kidnapping accomplice be revealed as Jerry Jacks? Keep watching GH, and reading General Hospital spoilers to see how this unfolds!