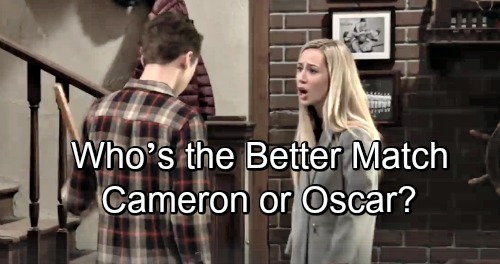 General Hospital (GH) spoilers tease that Josslyn (Eden McCoy) will find herself torn. Ever since Oscar (Garren Stitt) dumped her abruptly, Joss has been trying to figure out a way to get back together. She even roped Cameron (William Lipton) into a fake boyfriend plot to stir up some jealousy.

Of course, Cameron has had feelings for Joss for a while now. They’ve only intensified throughout their scheme, but his latest bomb just changed the game. Cameron did something right for once by spilling the truth to Josslyn. He betrayed Oscar, but it would’ve been wrong to enter a real relationship without disclosing the illness secret. Josslyn deserved to know why Oscar brushed her off anyway.

General Hospital spoilers say Joss will demand answers from Oscar on Monday. She’ll want to know what he’s up against and why he left her in the dark. It’ll take some work, but it looks like Josslyn will pry the truth out of him. Oscar will likely admit he has a deadly tumor, so he thought it was best to push her away. He decided that if Joss hated him, it’d be easier for her to let him go.

Josslyn will undoubtedly insist that she would’ve supported Oscar. She’ll hate that he’s been going through this alone. Naturally, Josslyn will be devastated when she realizes Oscar’s given up. If he fills her in on his emancipation lawsuit, you can bet Josslyn will object. She may point out that Kim (Tamara Braun) and Drew (Billy Miller) are hurting, too. Oscar’s just making the pain of all this even worse.

Furthermore, Josslyn won’t want Oscar dismissing the clinical trial idea. There’s a chance it could give him more time, so Joss will inevitably push Oscar to go for it. However, GH fans know Oscar’s dealing with a lot at the moment. He may not be keen on moving forward with the trial or getting back together with Josslyn. Oscar may argue that he has to stick to the plan – at least for now.

Could that give Cameron another chance to win Josslyn’s heart? They’ve been growing closer lately, so Joss may not be able to turn those feelings off. Even if Josslyn reunites with Oscar, part of her may start longing for Cam. Many General Hospital viewers seem to like Josslyn and Cameron as an item, too.

Oscar will probably cave in on the experimental treatment sooner or later. He may survive his cancer battle, but will he regret shutting Josslyn out? Do you think Josslyn should be with Oscar or Cameron? Who’s the better match? We’ll give you updates as other GH news comes in. Stick with the ABC soap and don’t forget to check CDL often for the latest General Hospital spoilers, updates and news.