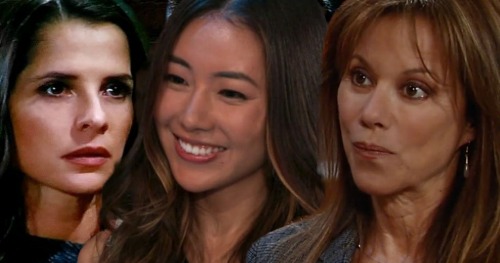 General Hospital (GH) spoilers tease that Kristina (Lexi Ainsworth) is already getting sucked into Daisy’s (Kelsey Wang) risky and mysterious world. She quoted a chapter from the literature Daisy passed along, which earned praise from her new friend. Kristina seems eager to learn Daisy’s ways, which is exactly what this apparent cult recruiter has in mind.

Daisy’s tactics seem fine on the surface. She helped Oscar (Garren Stitt) soothe himself after a headache hit and encouraged Kristina to serve a meal to the homeless. However, there’s a dark side to what Daisy’s selling. She’s reeling Kristina and Oscar in with the good stuff so they’ll be too brainwashed to notice the shift later.

Now that these vulnerable GH characters are hooked, who’s going to intervene? General Hospital has set up a potential heroine or two. It’s no coincidence that Alexis (Nancy Lee Grahn) is bonding with Oscar and serving as his lawyer. She’ll undoubtedly tie in with all this cult chaos at some point.

During a recent chat with Oscar, Alexis offered a possible hint about what’s to come. She talked about how she couldn’t turn off being a parent. Alexis assured Oscar that she’d do her job as his attorney, but she understood Kim (Tamara Braun) and Drew’s (Billy Miller) perspective, too. She suggested that she’d fight to the death if her daughters’ lives were on the line.

That could be a clue that a deadly situation is on the horizon. Kristina is obviously in over her head here. Since Oscar’s shutting his own parents out, Alexis may have to step up for him as well. Daisy’s convinced in the “DOD” mentality of “if you can think it, it can be.” That’s dangerous advice to give someone who’s battling a brain tumor that can only be helped by a clinical trial.

Daisy urged Kristina to bring Sam (Kelly Monaco) by to meet the whole gang sometime. We also know Sam and Kristina have some conflict coming up. Sam’s a smart cookie, so she may smell a cult right off the bat. Will she be the one to tip Alexis off and spark an intervention? Could they team up for this dire mission?