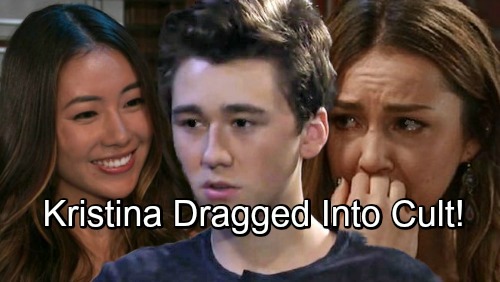 General Hospital (GH) spoilers tease that Jason (Steve Burton) and Sam (Kelly Monaco) will have a wonderful Thanksgiving. They recently set a date to watch the parade and have some pumpkin doughnuts, so they should have a fun day together. Of course, Danny (T.K. Weaver) will be part of the festivities. He’ll love having the chance to spend time with both his parents.

Sam and Jason could undoubtedly get used to this. Family bonding always warms their hearts along with the hearts of GH viewers – or at least “JaSam” fans! It’s nice to see these two inching their way back to each other.

However, Kristina (Lexi Ainsworth) seems to think the process should be moving a bit faster. She went on a drunken rant not too long ago. Kristina noted that Sam wants Jason and Jason wants Sam, so what’s the holdup? Why aren’t they allowing their relationship progress or letting themselves be happy?

To be fair, Jason would be fine with picking up the pace. It’s Sam who wanted to move slowly. Kristina may call her sister out on that soon enough. On November 30, General Hospital spoilers say Kristina will confront Sam about something. She’ll back her sis into a corner and demand some answers.

Perhaps Kristina will once again sense the growing connection between Sam and Jason. She may think she’s part of the problem since she’s been living at the penthouse. Maybe Kristina will decide to move out and head over to join the gang at Daisy’s (Kelsey Wang) place. They’ve got plenty of room and accept chores as credit for rent. Kristina wouldn’t have to dip into her presumably measly paychecks.

Regardless, Kristina will definitely be drawn to Daisy in the coming weeks. She’s probably reading that book Daisy passed along by now. This whole situation screams cult, but Kristina may fall for it anyway. Oscar certainly has! In fact, Kristina may be his only hope of avoiding real trouble. She’s older and slightly wiser, so she should see this place for what it really is eventually.