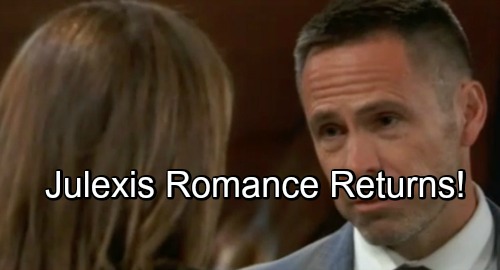 General Hospital (GH) spoilers tease that Julian Jerome (William deVry) and Alexis Davis (Nancy Lee Grahn) may reignite their romance. In a recent interview with ABC Soaps In Depth, deVry encourages everyone to keep an open mind about Julian’s future. He talks about fans’ response to “Julexis,” Julian’s relationship with Kim Nero (Tamara Braun) and so much more.

Julian certainly cares about Kim, but he’ll always carry a torch for his ex. Alexis just has that special something that Julian craves. It’s clear that Julian’s got some fantastic options. “There’s chemistry flying everywhere, so we’ve got great drama going,” deVry says. “What’s going to happen? The potential is exciting!”

Of course, “Julexis” is the pairing to root for. Kim and Julian aren’t a bad match, but they don’t have the advantage of history and long-term support. Julian and Alexis fans have been waiting on a reunion for quite some time. Their love story is pretty messed up, but GH viewers are forgiving if a couple’s hot enough and redemption’s been achieved.

General Hospital spoilers say Kim will remain distracted with Oscar Nero’s (Garren Stitt) brain tumor. Her son’s suffering right now and that’s making her suffer, too. Even though she won’t divulge anything, Julian has promised to be there for Kim. However, that could become tougher if Kim keeps pushing him away. She’ll definitely continue to lean on Drew Cain (Billy Miller), Oscar’s equally wrecked father.

If this trend keeps up, Julian may look for comfort elsewhere. Naturally, Alexis would make sense as his first stop. New General Hospital spoilers hint that Julian and Alexis will wake up together. Does that mean they’ll hit the sheets and bring back that familiar “Julexis” spark?

Let’s consider how this might play out. Perhaps Alexis will overhear Sam McCall (Kelly Monaco) talking about Oscar’s diagnosis. Sam might be confiding in Jason Morgan (Steve Burton) or consoling Drew at the time. While this news doesn’t directly affect Alexis, she may still have some concerns. Alexis might fear that there’s some sort of genetic risk to Scout (Palmer and Parker Poe) or Danny (T.K. Weaver).

GH watchers will recall that Danny needed a bone marrow transplant as a baby. That storyline revealed Julian as Sam’s birth father and ultimately brought him back into her life. Danny’s health crisis was a terrible ordeal for all of them, so that could end up weighing on Alexis.

Thanks to the Oscar developments, Alexis might seek out Julian to confide in. She may assume he’s already in the loop through Kim. Julian would be blindsided and would perhaps unleash some deep emotions. Seeing that softer side of Julian could pull Alexis right back to him. It could lead to some steamy scenes as pain simmers and feelings are revived.

Then again, there’s no guarantee their night together will be that sizzling. General Hospital writers might throw Alexis and Julian together for some other reason. It could be a less passionate, but equally meaningful wake-up call. Regardless, it sounds like Julian and Alexis will stay in each other’s orbit! That can only lead to good things for “Julexis” supporters.

Are you hoping Julian and Alexis find their way back to couple status? We’ll give you updates as other GH details emerge. Stick with the ABC soap and don’t forget to check CDL often for the latest General Hospital spoilers, updates and news.