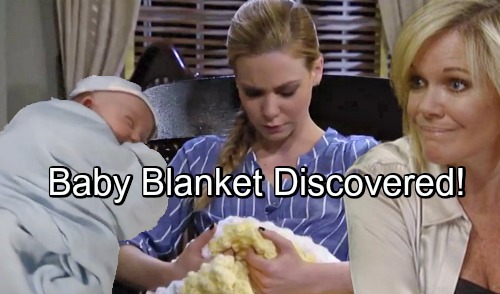 General Hospital (GH) spoilers say that Ava Jerome (Maura West) will ask her brother Julian’s (William DeVry) advice about what to do with the baby blanket Nelle Benson (Chloe Lanier) fought with Carly Corinthos (Laura Wright) over at her baby shower.

General Hospital fans recall that Nelle crocheted the blanket as a duplicate of Morgan Corinthos’ (Bryan Craig) blanket and the missing blanket was a crucial part of proving Carly was hallucinating and getting her put in Ferncliff. It was also a crucial part of Carly being arrested in the first place, for allegedly pushing Nelle down the stairs at the Quartermaine mansion!

General Hospital viewers will recall that Nelle and Carly had struggled over the blanket. Nelle spun her own tripping on the stairs into an intentional push by Carly, and since there was no blanket recovered, Carly was perceived as either lying or hallucinating.

General Hospital spoilers tease that Julian may offer to relieve Ava of the blanket, and not realizing it is a critical part of a court case, give it to Brad (Parry Shen) and Lucas (Ryan Carnes) as a gift for little ‘Wiley.’

Knowing Ava, she may not even tell Julian the whole truth about the blanket on Monday’s new GH episode, August 6 – she may just tell him it was for Michael and Nelle’s baby and now doesn’t know what to do with it, or tell him it would be a shame for such a beautiful hand crocheted blanket to go to waste!

The GH Monday preview (see below) shows that Ava is very nervous about that blanket, even with her own brother.

Another General Hospital spoiler says that Nelle throws Ava under the bus… and betrays her. That betrayal could be about Ava hiding the baby blanket.

All Ava would have to do to clear herself is tell Julian she found the blanket in Nelle’s desk at the gallery, since Nelle resigned and Ava would go through the desk as a matter of course. That way Julian can back up Ava’s story since he has no reason to doubt her.

Brad and Lucas won’t recognize the blanket from the shower, since no one saw it there except Nelle and Carly, and Ava saw Nelle crocheting it, and of course retrieved it after the staircase accident.

According to most GH histories, Lucas would have been 14 when Morgan was born, but most teenage boys just aren’t into babies and baby blankets, so Lucas probably won’t realize it looks just like Morgan’s blanket as a baby.

But there are other relatives that would be into babies and their blankets, and that would be grandmas! Jackie Zeman announced recently that she was back in the GH studio, and of course she plays Bobbie Spencer, Lucas’ adoptive mother.

Bobbie would likely want to meet her new “grandson” and would also know about Michael and Nelle’s baby (her great-grandson) “dying.” General Hospital spoilers tease that she may visit Lucas and Brad to see the new baby, and she will recognize the blanket as looking like Morgan’s baby blanket and put two and two together.

And as suspicious (and rightly so) as Bobbie has always been about Nelle, she will wonder why Brad and Lucas have that particular blanket. The recognition of the blanket will help exonerate Carly and get her charges dropped, proving Nelle gaslighted her.

We’ll give you updates as other General Hospital news comes in but you can rest assured that the baby blanket is going to come back into play. Stay tuned to the ABC soap and don’t forget to check CDL often for the latest General Hospital spoilers, updates and news.