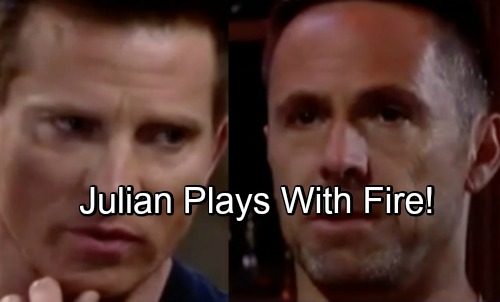 General Hospital (GH) spoilers tease that Sonny (Maurice Benard) will take charge of a tough situation. He recently learned the truth about the body he buried in Croton. Mike (Max Gail) moved it to Charlie’s Pub in Port Charles, so that means Sonny has a problem on his hands. Since the gun wasn’t in the Croton field either, we can assume Mike dumped it alongside the corpse.

Sonny knows that technology’s progressed, so there could be some DNA evidence left on that weapon. He’ll want to properly dispose of all the potential proof against him, but how he’s going to get to it? According to Mike, the body’s buried under the foundation. He insisted that the feds would have to bust it up if they wanted to find anything.

That seems like it’d be good news, but Sonny just won’t be able to leave this mess alone. Will he decide he has to retrieve the evidence somehow? Sonny could spark some dangerous suspicions if he’s not careful. It’s no secret that Julian (William deVry) and Sonny don’t get along, so a risky GH rivalry could reignite.

General Hospital spoilers say Sonny will decide to play it cool and extend an offer. Since he’s got plenty of money to throw around, it’s possible Sonny will want to buy the pub. That’d be one way to solve his problem! However, Julian seems to enjoy running the place. He’d probably turn that offer down instantly.

There’s also a chance Sonny will try to get in on some renovations. Julian sells Corinthos coffee, so maybe that could be part of Sonny’s excuse. He could suggest that he should be part of any expansion plans and offer to foot the bill.

Sonny might fib that he only serves his product in the best locations and act like he’s doing Julian a favor. Naturally, that’d raise suspicions right away. Regardless, Julian will probably reject any proposal Sonny makes. The less he has to do with Sonny, the better he likes it.

Still, Julian will undoubtedly mull all this over. He may sense that Sonny has something to hide and opt to use it to his advantage. Will Julian stumble across the proof and crack the case? That’s certainly a possibility to consider. Then again, Julian may initially operate on threats alone.

General Hospital spoilers say Julian will shock Sonny with a visit on a new GH episode July 18. That same day, Kim (Tamara Braun) will resort to begging. She’ll plead with “Charlie” about something, so perhaps she won’t want him mixed up in Sonny’s business.

Afterward, Sonny will realize he’s getting in over his head. It sounds like Julian will really rattle him! One way or another, Julian will likely learn Sonny’s secret. What will he do with that info? How will Sonny control the chaos? We’ll give you updates as other GH details emerge. Stay tuned to the ABC soap and don’t forget to check CDL often for the latest General Hospital spoilers, updates and news.